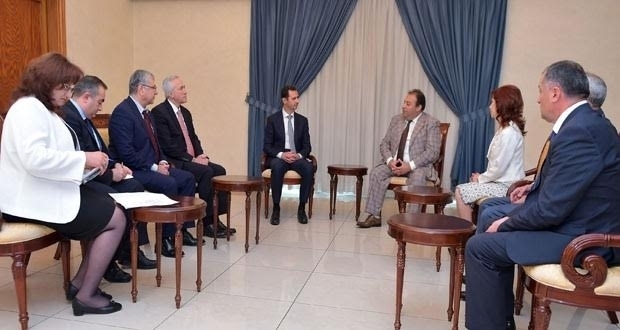 The people of Syria and Armenia face the same challenges and dangers, Syrian President Bashar al-Assad said on Thursday.

Drawing parallels between the dangers facing both countries, Assad likened Turkey’s president to the murderous Ottomans who massacred Armenians a century ago. Assad claimed Turkey’s government is using the same tool as was used in the killing of Armenians, namely terrorism, against the Syrian people today.

The president’s remarks came during a meeting with a visiting delegation of the Armenian-Syrian Friendship Association at the National Assembly of the Republic of Armenia, headed by the president of the association Tachat Vardapetyan.

Assad also warned against the expansive threat of terrorism on the entire Middle East region and the world, stating terrorism “knows no border and doesn’t stop at the frontier of this or that country.”

Vardapetyan stressed that the Armenian people will continue to stand by the people of Syria as they confront the regionally-backed terrorist war.

During the talks the two parties also stressed that the development of the relations between the National Assembly of Armenia and the Syrian People’s Assembly would assist in consolidating the relationship between the two countries.

Moallem reaffirmed the risk that terrorism posed to regional and international security, calling on the international community to pressure countries that support terrorism to cease their destructive policies.