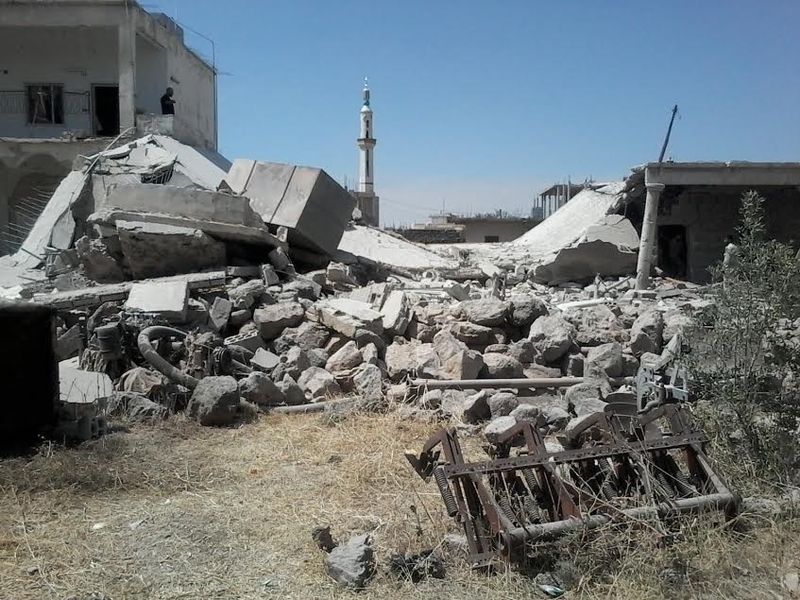 The province of Daraa recorded its heaviest air strikes by regime force since the outbreak of the Syrian revolution, with activists documenting more than 320 air raids in just one week. The deadliest attacks were recorded in the liberated areas today with the dropping of 75 barrel bombs.

The aerial bombardment targeted the cities and towns of al-Gharia ash-Sharqiyah, Nahta, al-Hrak, as-Soura, al-Lajat and Daraa al-Balad, leading to the death and injury of dozens of civilians, including en entire family in al-Gharia ash-Sharqiyah. The attacks also caused massive destruction to buildings and neighborhoods.

The campaign comes after Islamic State (ISIS) fighters failed to seize al-Lajat in the countryside of Daraa. Free Syrian Army commanders said the areal campaign is due to a weakening of regime forces on the ground, which the regime attempts to compensate through concentrated bombing on pro-opposition areas.

Sources also claim the regime uses ISIS sleeper-cells in the region to prevent any possible movement in southern Syria, while the coordination between the regime's air forces and ISIS fighters on the ground is at its highest level as they continue to target the same locations.