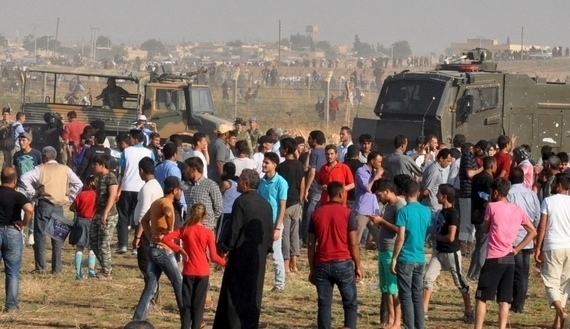 At least 200 of Syria’s Turkmen refugees arrived in the province of Urfa in southern Turkey on Tuesday evening, while 700 more are said to have fled to the eastern areas of Tal Abyad, after Kurdish People Protection Units seized the town of Tell Hammam al-Turkman in the countryside of Tal Abyad.

Syrian refugee Omar Dada told Anatolia News Agency: "People Protection Units of the Kurdish Democratic Union Party accused locals of collaborating with ISIS, and threatened to bomb their villages if they didn’t leave them", noting that up to 10,000 Syrian Turkmen live in the province of Raqqa without proper protection.

Activists said on Wednesday that the Kurdish militias raided the villages of Wastah al-Maksour and Sakhrat al-Khaddam in the north-eastern countryside of Ain al-Issa, 30 km south of Tal Abyad, displacing the entire population of the two villages before looting homes.

The media office in Tal Abyad said on Tuesday that Kurdish People Protection Units displaced the residents of az-Zinbaq in the countryside of Tal Abyad, gathering the women, children and men of the town in the village mosque, before forcing them to leave.