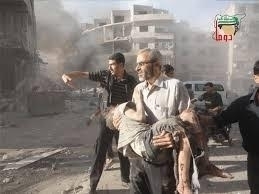 Syrian civil defense teams in the countryside of Damascus have declared Douma a plagued city, appealing in a statement to "human rights organizations, the United Nations, the Security Council, the major countries and the Arab League, to intervene immediately and save the remainder of this city and its people."

The civil defense teams stressed that the "bloody devastating attacks carried out against the city over the past few days has led to the deaths of more than 200 people, the injury of more than 400 others, and the destruction of a large number of buildings over the heads of their inhabitants."

Assad's forces committed an appalling massacre Saturday, leading to the deaths of more than 50 civilians, mostly women and children, where the remains of 18 civilians have been removed from the rubble of a building.