Artists are tasked with the mission of building bridges and divulging the nature of conspiracies targeting Syria, says Halki 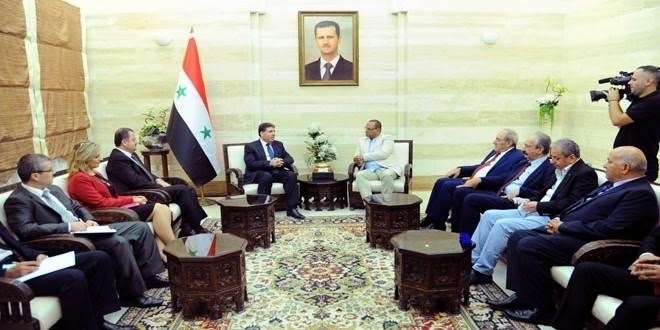 Prime Minister Wael al-Halki has stressed the vital role Arab artists have in enhancing the notion of belonging while immunizing the Arab society against radical takfiri thought.

Speaking to a delegation of Arab artists led by Union of Arab Artists Masaad Chairman of the Fouda, Halki said artists are tasked with the mission of building bridges and divulging the nature of conspiracies targeting the Arab nation and seek to foment chaos and instability in the Arab world.

Commenting on Syrian art under the crisis, the PM said that some Arab regimes have sought to weaken and isolate its role as it “bears a true message of Arabism,” adding the creative and artistic movement in Syria has boomed thanks to the care accorded to it by the Syrian leadership.

Members of the delegation expressed solidarity with the Syrian people and artists against the terrorist war targeting them, voicing confidence in Syria’s victory over terrorism.

In similar statements, members of the delegation said they had seen the situation in Syria first hand, claiming the country continues to stand its ground, strong and unbowed.