"We will not die, Bashar will not kill us by hunger,” woman tells camera in activist video 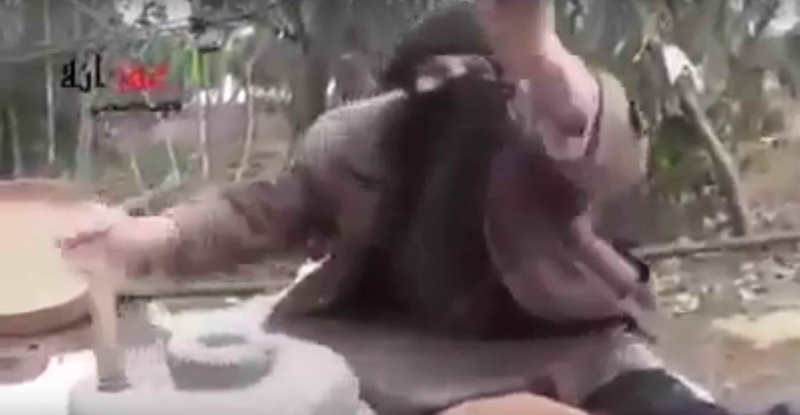 In a video published on the internet by activists, an elderly lady from the village of Zafarana in Homs’ countryside has expressed her opinion of current events in Syria.

“We will not die, Bashar will not kill us by hunger,” the old woman can be heard saying while grinding on the mill stone.

She went on, “no God but Allah” equals the whole world, adding, “if we died, we would die on Mohammad’s religion, but Bashar would die on the religion of the infidels.”

The National Coalition and the opposition also took their share of heat from the Homsi resident, who accused political representatives of working only for personal benefits, stating that “tomorrow they would sit on hell’s floor.”

She added that if women were required to fight, she would be the first to carry the gun to defend the martyrs’ sacrifices.

The old woman mentioned that her family had lost five martyrs – two sons, a brother and a sister and a cousin – stating that she would not wait for anything from the outside world, and instead wait for victory from God, as Homs is the city of Khalid Bin al-Waleed.

Singing an old song, the elderly woman recites: “God is great above the aggressor’s hate, the God is the best supporter to the oppressed, I with certainty and arms would defend my country, as the light of truth is in my hands.”

Speaking of Hezbollah General-Secretary Hassan Nasrallah, she said: "The liar and Devil, we used to wait him minute by minute to hear his speech, but we realize later that he was preparing himself to hit the Syrians.” She likened the Lebanese Shiite leader to Magian Abo Lulua, who stabbed the Caliph Omar ibn Al-Khattab while he was praying at dawn time.

The woman concluded by repeating her confidence in eventual victory against Assad and prayed to God to protect the opposition fighters.