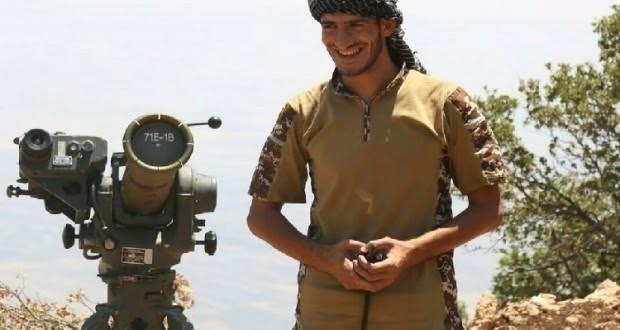 The Army of Conquest (Jaish al-Fatah) announced the launch of the "Hama Liberation Battle" in central Syria, the second phase of the "Liberation of the Levant," in a statement published on Tuesday.

Member of the Information Office of Ajnad ash-Sham Abu Khaled said that factions of the Army of Conquest – including Nusra Front, Ahrar ash-Sham, Ajnad ash-Sham, Jund al-Aqsa, ash-Sham Corps, Liwa al-Haq and Jaish as-Sunnah – issued a statement declaring the liberation of the city of Hama to face Russian aggression in Syria.

The statement said the new battle comes in response to the Russian and Iranian-led campaigns in Syria.

Abu Khaled explained that the battles will include fighting in regime-held areas in the province of Hama, adding that Jaish al-Fatah "was able to absorb the attack of Assad's forces on all the fronts in the countryside of Hama, as the regime did not achieve any significant results."

The head of the Ajnad ash-Sham media office, Abul-Magd, said the military action will start from the countryside and spread to encompass the entire province of Hama.

Spokesman for Ahrar ash-Sham, Abu al-Yazid, said in a press statement that "the announcement of the offensive was previously planned, but the recent ground offensive launched by Assad's forces under Russian air cover delayed the declaration of the battle."

“The declaration coincides with the streak of defeats of Assad's forces and his Russian, Iranian and Lebanese allies, especially after the collapse of their morale in recent battles against the opposition factions. Army of Conquest fighters repulsed an attack on the town of Mansoura in a battle that led to many casualties among pro-regime forces," Abu al-Yazid said.

On the other hand, sources in the regime confirmed to Al Jazeera news channel that the death toll among regime forces had reached 400 fighters, according to the statistics of Hama National Hospital. According to the same sources, the figures came as a shock to many battle commanders, who were betting on the success of the military campaigns in the countryside of Hama.

Activists said that field doctors have confirmed the arrival of ambulances carrying dozens of dead and injured bodies to the Hama National Hospital since fighting commenced on October 7. In spite of the heavy losses in the ranks of Assad's forces and his militia, the regime continues its military campaign on the villages and towns of Hama, the deadliest campaigns witnessed in those areas since the beginning of the civil war.

The General Commander of Saiyd ash-Shuhadaa Brigade, Abu al-Abed, said that the regime is mobilizing 3,000 troops from Brigade 87 to the east of the province of Hama, near the village of Kafraa, with a plan to form a new military corps under the name of "The Fourth Corps," to be supported by the National Defense Force militias in an attempt to make up for his losses in Hama.