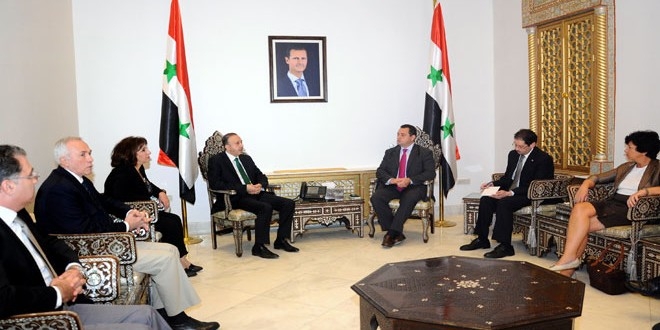 Jean-Frederic Poisson, member of the National Assembly of France, has stressed there cannot be a solution to the crisis in Syria without President Bashar al-Assad.

His remarks came during a meeting with Speaker of the People’s Assembly Mohammad Jihad al-Laham on Tuesday.

Poisson, who is visiting Syria along with a French delegation, admitted he could not grasp the direction of France’s foreign policy.

“All those whom I met during my previous visit to Syria expressed regret that France has lost its weight in the region,” he added.

Poisson met with President Bashar al-Assad on his latest visit to Syria last July, where he stressed the necessity to cooperate with the Syrian government to eliminate terrorism and its risks.

He said the return of stability to Syria would reflect positively on the stability of the region and Europe, adding, however, this would not be achieved without support for the Syrian state and dialogue with President Assad.

For his part, Laham reiterated that national sovereignty and the independence of the national decision cannot be compromised, as “they are the right of France, Syria and all countries, and governments should maintain them.”

“No country has the right to interfere in the affairs of other countries and support the opposition with arms and through media and financing, because this would be a violation of the international law,” Laham added.