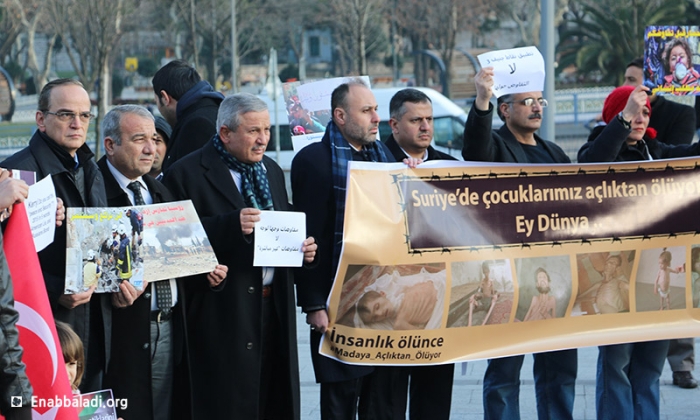 The opposition Syrian National Coalition organized a sit-in bringing together a number of Syrians in the Turkish city of Istanbul to emphasize that halting Assad’s barrel bombs, the Russian aggression, breaking the blockades, and freeing prisoners are humanitarian conditions, and not subject to negotiation, and should be achieved before the commencement of any talks.

Speaking with Enab Baladi following the meeting, Coalition Secretary-General Yahya Maktabi said the message of the sit-in, which coincided with the original scheduled date for the start of the Geneva talks, was that “we are the forces of revolution, and the opposition is serious about stopping the cascade of Syrian blood and moving toward a new future for Syrians.”

Maktabi rejected what he described as “acquiescing to the criminal regime in Damascus”, saying that a positive atmosphere needed to be provided before the start of the talks, “to give successful indicators and steer clear of dilution, as the point of sitting at the negotiating table is not to take souvenir photos.”

The secretary-general said that UN envoy Staffan de Mistura, “is bowing to Russian pressure”, and that the message of the opposition will not change. He rejected the intervention of any party in the formation of the opposition delegation, saying it was a “distinctly Syrian affair, and the [opposition] High Committee for Negotiations is in charge of the decision to add names or exchange them.”

Former coalition president Hadi al-Bahra supported Maktabi’s remarks, commenting to Enab Baladi that the coalition members stand as one behind the High Committee and its delegation, and reject any foreign intervention to change its composition or any attempts to bring in reserve or alternative delegations or even increase the Assad regime delegation.

A number of activists and political personalities also participated in the sit-in, including member of the opposition’s delegation to Geneva Natheer al-Hakim, head of the coalition’s legal department and member of the negotiating delegation Haitham al-Maleh, in addition to Coalition Deputy Secretary-General Neghem al-Ghadiri, and member of the general authority in the Syrian National Coalition Yassir Farhat.