Assad delegation will only attend dialogue based on principles of Vienna statements and UN resolution 2254, which states talks must be held without preconditions, foreign minister tells reporters 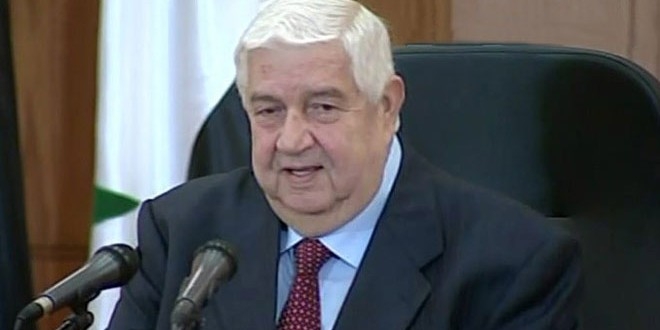 The Syrian government will not comply with any precondition set by any party for an intra-Syrian dialogue, Foreign Minister Walid al-Muallem said.

Speaking to reporters on Saturday, Muallem referred to Syria’s reply to the invitation letter sent by UN envoy to Syria Staffan de Mistura on January 26, inviting the Syrian government delegation to participate in the Syrian peace talks.

The response, Muallem said, stressed the government delegation’s readiness to take part in the dialogue based on the two Vienna statements and UN Security Council resolution 2254, which states that the Syrian people alone have the right to determine their future and that dialogue should be Syrian-led and among the Syrians, away from foreign interference and without preconditions.

Contrary to that, the statements of the opposition High Negotiations Committee delegation were full of preconditions, including those about the humanitarian situation, said Muallem.

Muallem noted that the Syrian government delegation asked de Mistura to provide them with a list of the names of opposition delegates with whom the government would be negotiating with, explaining they wouldn’t “hold dialogue with ghosts.”

According to Muallem, the list was only presented at the concluding session of the suspended talks, which had not even begun, he explained.

He said the opposition delegation had already decided to walk out of the dialogue following the victories made by the Syrian army, specoifically those in the northern countryside of Aleppo in Nabul and Zahraa.

“We hoped the [opposition] delegation, who talked about humanitarian issues, would feel happy just like our people were happy with breaking the three-and-a-half year siege of 70,000 locals of Nabul and Zahraa, but they packed their luggage and left,” said Muallem.

“They didn’t feel happy simply because their affiliation is not to the [Syrian] people,” he elaborated.

He stressed that regardless of the Geneva track, the Syrian government pays the greatest attention to the humanitarian issues and to providing food and medical support to all its people, especially those who are besieged by armed groups and being used as human shields.

Muallem reiterated Syria’s belief that the political solution is the only way to solve the crisis in Syria, noting: “We don’t link between what is taking place on the ground and the political work, and we are working in parallel in the fight against terrorism,” adding, “This issue is one thing and Geneva conference is another thing.”

“We are very keen on Syria’s sovereignty and territorial safety and ridding it of terrorism… aggressors who dare attack Syria, be they from Turkey, Saudi Arabia or other [states], will return in wooden coffins… we are a sovereign country and we will repel any violation,” he warned.