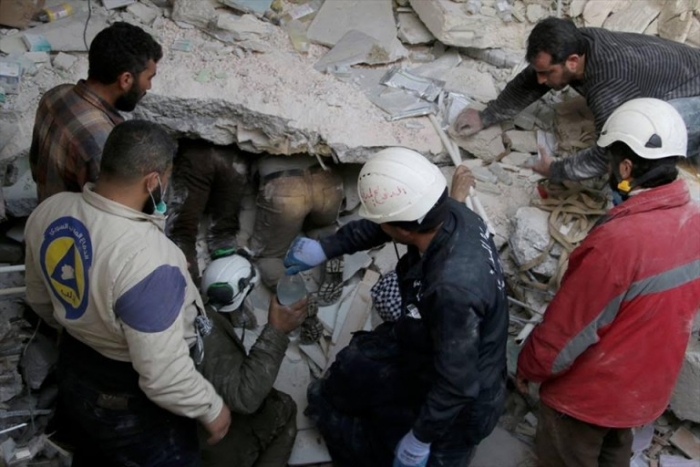 “We heard a noise we’d never heard in our lives. We weren’t expecting this sort of power. Then we saw nothing but a pile of rubble above our heads. The light was suddenly gone, and so was the room where we were preparing surgery for one of the patients in a section one floor underground,” one female survivor of the suspected Russian air raid on the Medicins Sans Frontiers (MSF) hospital in Maarat al-Nouman told All4Syria.

The nurse, Rafif al-Harami, relayed her story as she wept for friends who are now dead. The raids caused breaks in Rafif’s arms, as well as a mild skull fracture.

A mother of two children, Rafif started working as a nurse two months ago, with a modest salary of no more than 70 dollars.

Rafif spent more than seven hours under the rubble of the hospital, a pile of ruins upon ruins. A Russian warplane carried out two air strikes on the hospital south of Maarat al-Nouman last Monday morning, February 15. The Russian strikes used vacuum bombs over a short period.

Mohamad al-Reemi, one of the nurses who also survived the bombing said in comments to All4Syria: “I had just stepped down from the second floor in the MSF hospital to lock my motorcycle. It was my first day at this hospital, and one of my colleagues called, ‘come have tea,’ and so I told him, ‘wait for me two minutes, I’ll lock the motorcycle and come to you.’”

Reemi continued: “I’d just arrived at the hospital’s outside courtyard when I heard a sound that almost took away my hearing, and within seconds I’m more than 30 meters from the hospital, and one of the civil defense team members is calling, ‘are you alive? Are you alive?’ I answered with half words, ‘I can’t move,’ and so he carried me quickly to his car and headed fast to the nearby national hospital. No sooner had we arrived than I heard someone calling on the wireless: ‘there’s an Assad regime plane above the hospital.’”

Reemi continued his account of the hospital bombings: “I was just sleeping on a bed on the first floor, and can’t move, and within moments I heard a sound – like the previous sound, and I realized death is inevitable, that I will die, and fell on the floor.”

The raid this time was by a regime warplane, targeting the national hospital, where some of the wounded that had been pulled out from the rubble and transported to.

The number of victims from the MSF and national hospitals reached 27, including a doctor and eight nurses, and the rest were civilians. According to activists, the hospitals were targeted even though the nearest point of clashes between rebel brigades and Assad’s forces was more than 50 kilometers away.