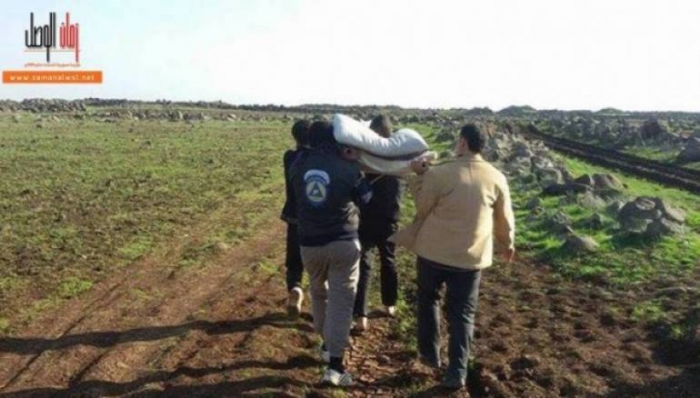 The recent military campaign by the Syrian army and Russian air force on Harbanafsa in the Hama countryside has increased the burden on the civil defense forces, which already suffer from a shortage of manpower and equipment.

The hardships faced by the 'White Helmets' has been further exacerbated by Russian air strikes targeting the Hama countryside for almost 40 days. Civil defense workers regularly carry victims on their shoulders to hospitals sometimes over 10 km away, over rugged terrain, risking their lives crossing the roads between the villages of Jadrin and Kafrnan, where regime barriers and snipers wait.

“Things get much worse with rain, as roads become difficult to use even on foot,” said Civil Defense volunteer Mohammed.

Abou Bilal, the head of the civil defense in Hola, described their suffering when transferring the wounded from Harbanafsa as “unbearable,” adding that the strain on workers “stretches the endurance of a human being."

He explained that the available equipment is acceptable, but says teams suffer from lack of heavy and medium sized equipment as well as manpower, as well as safety equipment for workers, like helmets.

Abou Bilal said the team was provided with an ambulance and some equipment last year, but explained the vehicle still lacks fuel and specialized equipment due to high prices.