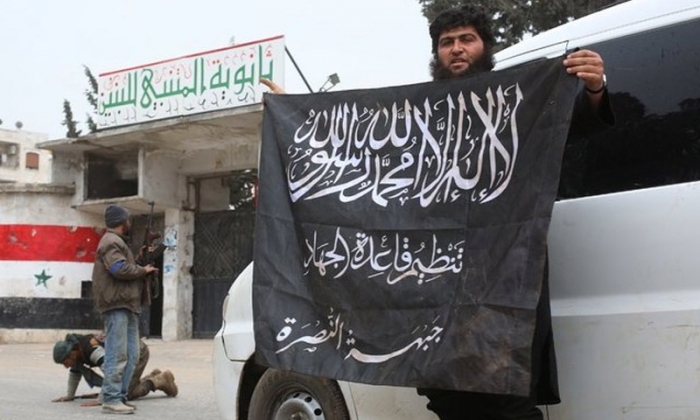 A group of militants from the Nusra Front attacked an anti-Assad protest organized by activists in the city of Idleb on Monday, beating several of its organizers and confiscating a number of cameras.

A media activist, who refused to publish his name, told Al-Souria Net that “militants from the Nusra Front and Jund al-Aqsa beat protestors, pulled down the flags of the revolution and stomped on them and tore them, as well as pursuing a number of media activists and confiscating the cameras in their possession. They then proceeded to raise the black banners of the organizations (Nusra and Jund al-Aqsa).”

The activist said that “the protest included hundreds of civilians, and stressed the goals and principles of the revolution and its demand to bring down the regime, without attacking any faction or directing criticism toward anyone.”

Many of the residents denounced the behavior of the Nusra Front and Jund al-Aqsa militants against the protest, as others described their actions as “shabeeha-like,” comparing it with the actions of the loyalist militias during the beginning of the Syrian revolution and their forceful repression of the peaceful protests.

In a video distributed by activists on YouTube, members of the Nusra Front had previously insulted protesters who came out days ago in the town of Maarat al-Nouman, accusing them of calling for democracy and bolstering the unarmed movement.