Three day exhibition aims to shed light on life in the devastated town of Tel Shehab by showcasing a range of artworks from students, teachers and artists 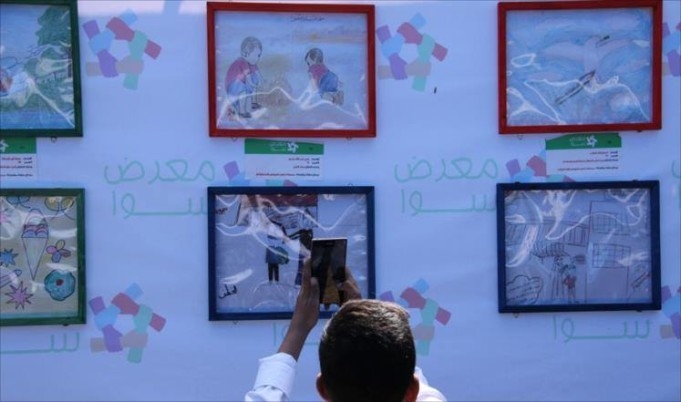 An exhibition for drawings, caricatures, paintings and sculptures in the opposition-controlled town of Tel Shehab has been opened in the western Daraa countryside.

Abdel Majeed al-Aishat, one of the exhibition’s curators, told Al-Hal Al-Souri that the exhibition was opened in one of the town halls of Tel Shehab with the participation of a number of local artists, teachers and students. The exhibition is the first of its kind in the town and will last for three days.

Aishat added that the works were chosen to be displayed to shine light on the harsh reality in which the town lives, including the suffering and daily bombardment inflicted by Syrian regime forces on the areas under opposition control.

He added that the exhibition was divided into three parts: a section for artists, another for teachers, and another for students of the school in an effort to motivate them to practice drawing.

Ahmed al-Abdallah, a sixth-grade student, said: “This is the first time I’ve participated in an exhibition. I made a painting expressing some of the suffering of the Syrian people in light of the continuing war.” Some children artists participated with their illustrations and received some basic instructions in drawing and feedback from specialists.

It is the first time an exhibition has been organized in areas under opposition control in Daraa province since the start of the revolution.