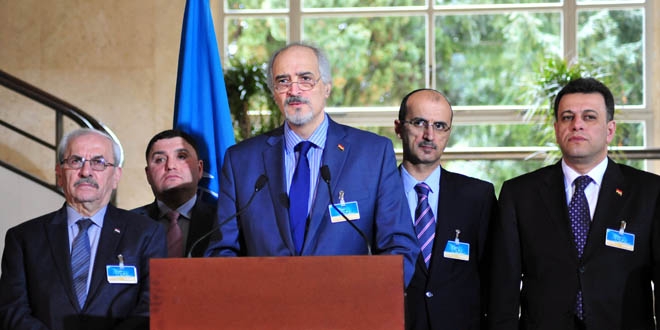 The Syrian government delegation to the Geneva talks met with UN Special Envoy for Syria Staffan de Mistura on Monday to discuss the recent Israeli provocation in the occupied Syrian Golan Heights.

Syria’s head negotiator Dr. Bashar al-Jaafari said that Damascus called on the UN to condemn the Israeli meeting held by Israeli Prime Minister Benjamin Netanyahu, requesting that it never be repeated as it violates UN-recognized laws which consider Israel’s decision to annex the Golan Heights absent of any legal authority.

“We reaffirmed to de Mistura the Syrian Arab Republic’s right to recover the occupied Syrian Golan up to the 4th of June 1967 line using all legal recourses guaranteed by the UN Charter, including article 51 on the right to self defense,” Jaafari said.

He also stressed that this provocative behavior against the Syrian people, state, and government is indisputable confirmation of Israel’s cooperation with terrorist organizations, including Nusra Front and the Islamic State group, who are active along the armistice line in the occupied Golan Heights.

Jaafari went on to note that Syrian freedom fighter Sedqi al-Maqet, who was detained by Israel for 27 years was later arrested again by Israeli forces for documenting evidence of the dealings between Jerusalem and terrorist organizations operating in the Golan Heights.

It’s not a coincidence, Jaafari said, that the Israeli escalation by Netanyahu in the occupied Syrian Golan was accompanied by provocative statements by some members of the opposition delegation in Geneva, pointing to the existence of close ties between Israel and terrorists inside Syria.

Jaafari also announced that he presented de Mistura with a document of amendments and remarks on his 12-point paper, adding that the Syrian government “is waiting for him to return to us with the reactions of the opposition groups after discussing the paper.” The Syrian government delegation will meet again with de Mistura on the morning of Wednesday, April 20.