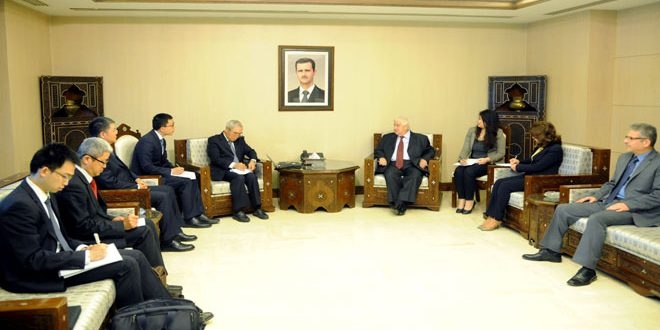 Deputy Prime Minister Walid al-Muallem met with Chinese Special Envoy for Syria Xie Xiaoyan on Thursday to discuss means to find a solution to the crisis that preserves the interests of the Syrian people, their right to an independent decision and their country’s sovereignty.

Muallem told Xie that Syria’s people and government are continuing to combat state-backed terrorist organizations which are offered passage through bordering countries while being provided with advanced weapons to open new fronts.

This continued support requires that an international stand be taken to the effect of respecting the UN Security Council resolutions related to combating terrorism, he added.

Muallem referred to the recent stance of the Saudi-backed opposition High Negotiations Committee delegation, “which wanted to sabotage [the] Geneva talks, and it was clear that it rather prefers military escalation.”

For his part, the Chinese envoy said Beijing stands by its calls for restoring security and stability to Syria and supports the intra-Syrian dialogue to solve the crisis, stressing the Syrian people’s right to resist interference in their internal affairs.

Later, presidential advisor Bouthaina Shaaban met with Ambassador Xie to present a full review of the crisis in Syria and the problems in the US and international attitudes. Shaaban pointed to the existence of regional factors influencing the crisis that are out of Syria’s control, mainly the funding, arming and facilitating cross-border movement of militants from Turkey, and the non-compliance with the Security Council resolution no 2253.