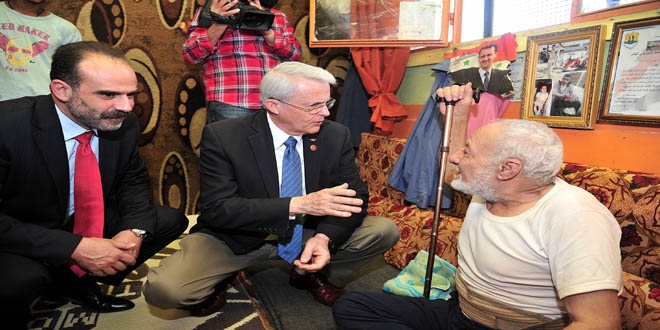 Syria is undertaking a great task by fighting terrorism, US Senator for the state of Virginia Richard Black said, adding that should terrorists succeed, there would be grave repercussions on the security and stability of the world.

Mufti Hassoun, for his part, stressed to Black that the Syrian people are committed to national unity and are determined to continue fighting the terrorists.

The Senator later made a visit to a makeshift center hosting displaced people in Sumaiyeh al-Makhzoumi school in Mezzeh neighborhood where he was received by Deputy Governor of Damascus Ahmad Nabulsi.

Black toured the living conditions of the displaced families and reviewed the health and medical services provided by the Syrian state, while also taking time to listen to the stories of victims who had suffered due to the terrorists’ crimes.