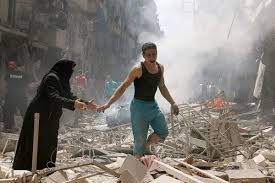 In a statement released by the HNC on Tuesday, Meslet said that up to 8,000 civilians in the town of Daraya are on the brink of starvation due to the continued siege, adding that a crippling siege in Homs is depriving around 250,000 civilians of basic necessities.

“The international community's failure to stop the bombing and besiegement of our civilians causes the deaths of innocents every single day across Syria," Meslet said.

He added: “The Assad regime's continued blocking of humanitarian aid and violations of the cessation of hostilities shows a blatant disregard for the regime to adhere to internationally agreed upon resolutions."

Meslet went on to say that due to the international community’s inability to guarantee the security of the Syrian people, “the HNC's Chief Negotiator Mohammed Alloush has stepped down from his position. Our people are dying, our cities are burning to the ground, and yet the world stands idly by.”

The spokesman pointed out that Alloush will remain part of the HNC’s delegation to Geneva as a security and military expert.

Meslet said that the HNC proposed to UN Secretary General Ban Ki-moon a truce to be enforced during the month of Ramadan, which begins on Monday.