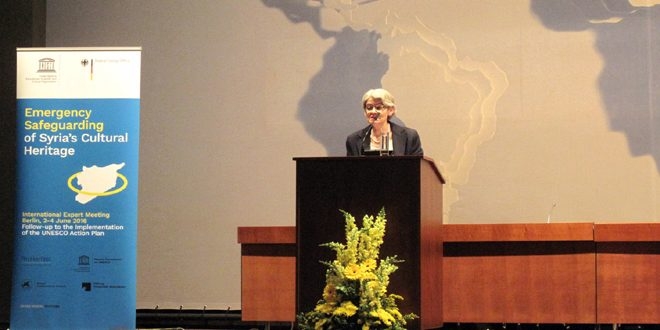 Syrian and foreign experts joined forces for a two-day conference in Berlin to assess the damage to Syria’s cultural heritage sites and to develop emergency safeguarding measures for the country’s heritage.

Some 230 participants attended the event in the German capital, including leading archaeologists, anthropologists, architects, urban planners and experts in monument preservation, along with representatives from Syria’s antiquities directorate.

Several roundtable discussions were held on damage assessment and current actions by cultural heritage professionals with sessions focusing on the role of local communities, documentation and archives, capacity building and safeguarding plans.

Conference goers addressed the critical issue of looting and illicit trafficking of cultural heritage, calling for a comprehensive list of looted objects from Syria and appealed on all governments to implement UN Security Council Resolutions banning trade in cultural heritage from the country.

The experts furthermore appealed to international funding and development agencies to include cultural heritage in major funding programs and recovery plans.

The meeting paved the way for UNESCO to update and develop the action plan for the Emergency Safeguarding of Syria’s Cultural Heritage, adopted during the organization’s first expert meeting on Syria in 2014.