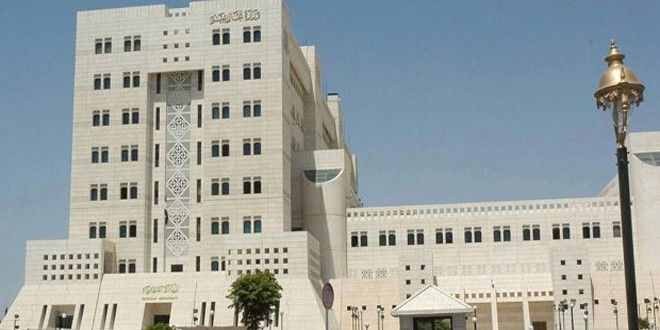 Syria’s Foreign Ministry said on Monday that the violations and massacres committed by the Turkish regime on Syrian territory constitute a crime of aggression and a crime against humanity, adding that combating terrorism in Syria by any state must be in coordination with the Syrian army and government.

“The Turkish army’s air and artillery forces, in coordination with the armed terrorist organizations, targeted the villages of Jub al-Kusa and al-Amarneh to the south of Jarablus city in Aleppo through shelling randomly, leading to a massacre and killing 35 civilians,” the ministry said in a statement to the UN.

It added that the Syrian government condemns in the strongest terms the repeated crimes, violations, aggression and massacres perpetrated by Turkey against the Syrian people, its sovereignty and territorial integrity for more than five years.

The statement accused ISIS fighters of cooperating with Ankara, which the ministry said allowed the Turkish army to enter Jarablus without “firing a single bullet.”

“The continued support of France, USA, Britain, Saudi Arabia and Qatar to the Turkish regime is a clear support to terrorism, not only in Syria but in all world countries,” the ministry wrote.

The Syrian government called on Turkey to immediately withdraw from the Syrian territory, and to respect its sovereignty and territorial integrity.