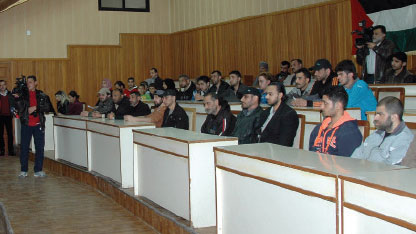 The head of the reconciliation committee in parliament, Khaireddin al-Sayed, said that the National Reconciliation Minister, Ali Haidar, has not responded to the parliamentary committee’s request for greater cooperation despite visits to his office— still, up to this moment, he has not sent us any response to our questions.

In comments to Al-Watan, Sayed announced that a meeting of the council yesterday included discussion of adopting subcommittees in the provinces under the central committee headed by senior parliament members (not local notables). He said that it would have a large role in achieving reconciliations.

Sayed revealed that he would communicate with Prime Minister Imad Khamis to return staff laid off because of malicious reports, pointing to the development of a working mechanism to determine whether employees were fired unjustly or not.

Sayed said that he had agreed in the meeting to visit shelters and contribute to improving their conditions in coordination with the Local Administration Ministry and the Social Affairs and Labor Ministry, adding that there were good centers and others that needed more servicing, and that the reconciliation committee in this parliament would play a large role in that.

Regarding whether there was any conflict with the premiership’s reconciliation committees, Sayed said that the parliament committees’ work would be independent and not have any relation with other committees, but that this did not mean that it would not coordinate in reconciliation affairs in the area. He said that what was important was to achieve highly beneficial reconciliations.