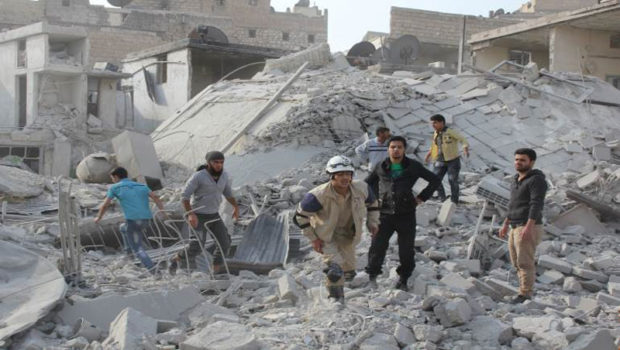 Russian air strikes targeted the western Aleppo countryside late on Monday evening, destroying the Baghdad hospital, killing and wounding dozens and burying others under the rubble.

The Baghdad hospital is one of the most important hospitals providing services to more than 80,000 people in the western Aleppo countryside.

Media activist Abdel Salam Mustafa told ARA News that “the Russian warplanes targeted the Baghdad hospital which is west of the town of Kafranha between the town and the village of Awjeil with four seismic rockets. The bombardment caused the destruction of large parts of the hospital and the death of more than 10 people and wounded others, including hospital staff. There are others still stuck under the ruins.”

He added that civil defense forces are working to remove the rubble to save the survivors and remove the corpses, adding that emergency organizations have been called on to transfer the wounded to Idleb’s hospitals due to the serious condition of some victims.

Joint warplanes have been intensifying their air raids with seismic and vacuum rockets on the towns and villages of western Aleppo’s countryside.

The attack brings the total number of hospitals targeted by Russian warplanes on Monday to three, which will result in depriving more than 100,000 people of medical services provided by these facilities.