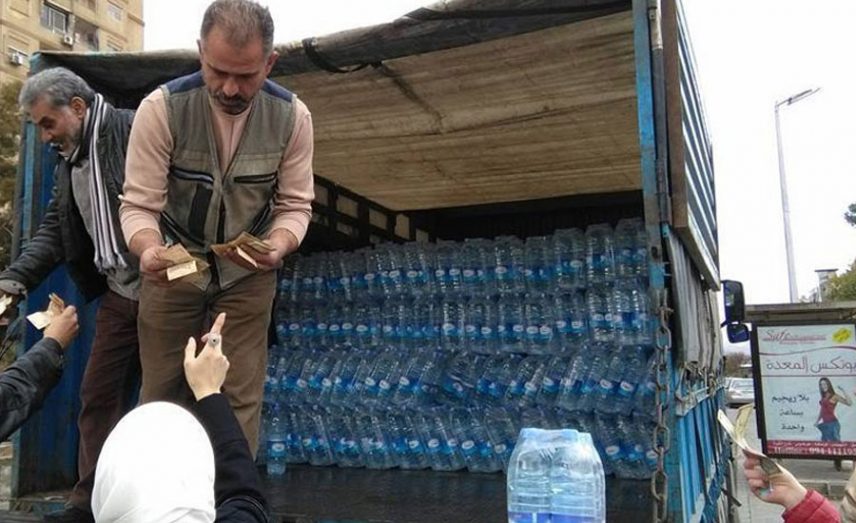 The suffering of citizens in Damascus and its surrounding suburbs has increased recently due to the shortage of water following the ongoing conflict in the nearby Barada valley.

The shortfall of available water has contributed to the development of a black market headed by water tank owners and store vendors, who aim to exploit the public during a time of crisis.

Abdullah Jumaa, a store owner in Masaken Barzeh, Damascus told Enab Baladi that the price of a liter and a quarter water refill had reached 140 Syrian pounds ($0.70), and sometimes up to 150 pounds.

The general manager of the water authority in Damascus and its countryside, Mohamed al-Shiyah, called on residents to conserve and not overuse water, and also to avoid storing large amounts.

Shiyah told the newspaper al-Watan, which is close to the regime, that “the city of Damascus and its countryside needs more than 300,000 cubic meters of water a day and the amount currently distributed is no more than 40 percent of what is needed.”

Shiyah had earlier announced that there was no thirst in the city of Damascus and that the share of water for each person during the emergency plan ranged between 30 to 35 liters a day.

But Syrians on social media said that Shiyah’s statements were untrue, and that many areas of Damascus and their suburbs had not received water for four days.