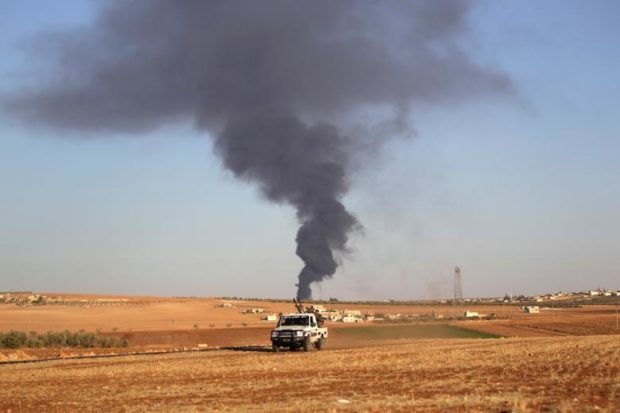 Russian air strikes accidentally killed three Turkish soldiers and wounded 11 others when engaging in an operation against terror group ISIS in northern Syria on Thursday, the Turkish military said.

“During an operation by a Russia Federation warplane against ISIS targets in the region of the Euphrates Shield operation in Syria, a bomb accidentally hit a building used by Turkish Army units,” the military said in a statement.

The incident highlighted the risk of unintended clashes between the numerous outside powers involved in Syria’s complex six-year-old war. Besides Russia and Turkey, they include Iran-aligned proxy Hezbollah and other Iranian-backed militias, and members of a U.S.-led coalition fighting ISIS.

Russia is a key ally of Syrian authoritarian Bashar al-Assad, while Turkey supports the rebels opposing him. In 2015, Turkey shot down a Russian air force jet that it said had crossed into Turkish airspace, though Moscow denied that happened.

Turkish-backed Syrian rebels meanwhile pursued a major offensive against the ISIS-held Syrian city of Al-Bab, 30 km south of the border with Turkey.

A rebel commander said fighters of the Free Syrian Army (FSA), working with Turkish commanders, were moving forward from territory near the western gates of the city, which they had stormed on Wednesday.

“The battles began a short while ago to complete what had been achieved yesterday,” said a commander of a leading FSA group fighting in al-Bab, who requested anonymity.

The capture of the town would deepen Turkish influence in an area of northern Syria where it has created a de facto buffer zone. It launched its Euphrates Shield operations in August, backing Syrian rebels with special forces, tanks and aircraft to sweep ISIS hardliners from its border area and stop the advance of a Kurdish militia.