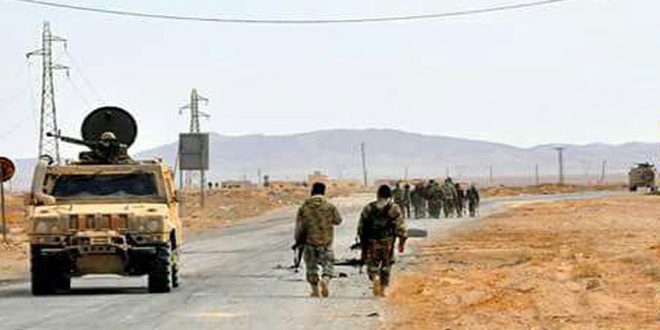 The Syrian army killed and injured large numbers of Islamic State terrorists in operations conducted against their gatherings and movement routes in the countryside of Hama.

The Syrian air force carried out a series of air strikes on ISIS positions in Hammade Omar village, which lies about 40 km east of Salamiyeh city, SANA’s reporter in Hama said on Monday.

Meanwhile in Deir-ez-Zor, Syrian army units backed by air strikes shot down an ISIS reconnaissance aircraft and killed a number of its militants in the city and countryside.

SANA’s reporter in Deir-ez-Zor said that the army units defending Deir-ez-Zor's military airport brought down the ISIS aircraft, which had been laden with bombs.

The reporter added that another army unit destroyed ISIS fortifications near al-Maqaber in the southern outskirts of Deir-ez-Zor city and in al-Jafra village in the eastern countryside of the province.

The army also targeted a large number of ISIS vehicles in al-Heraj area in al-Husseiniyeh village in the northern countryside, killing and injuring a number of terrorists.

Other army units thwarted an attack by ISIS terrorists on the Panorama area and destroyed their sites and hideouts in al-Maqaber area and the Old Airport, al-Hamidiyeh and al-Sinaa neighborhoods in Deir-ez-Zor city.

In Suweida, another army unit carried out a military operation against an ISIS site near al-Rashideh village, about 38 km east of the city.

A military source told SANA on Monday that the army unit destroyed a number of ISIS vehicles, killing and wounding a number of militants, about 12 km east of al-Rashideh village.

Army units in cooperation with supporting forces established full control over Turfa Asharkiyah village in al-Bayarat area in the eastern countryside of Homs, a military source told SANA on Sunday.

The source pointed out that the operations in the area resulted in the death of a number of ISIS terrorists and the destruction of many of their vehicles, fortifications and ammunition.

In the eastern countryside of the province, another army unit eliminated all the members of an ISIS terrorist group in al-Bardeh area in Homs and destroyed their weapons and ammunition.