Jaafari said that his meeting with de Mistura focused on the issue of fighting terrorism and called on UN and all other delegations to unequivocally condemn the suicide bombings in Homs, Syrian news agency reports 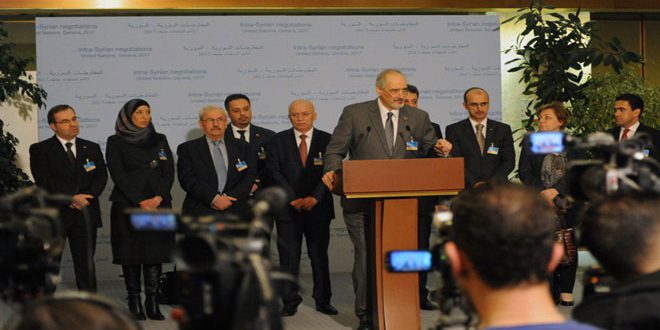 Head of the Syrian Arab Republic delegation to Geneva, Bashar al-Jaafari, said that his meeting with UN Envoy Staffan de Mistura focused on the issue of fighting terrorism as a top priority.

After his meeting with de Mistura, Jaafari told reporters that his delegation asked de Mistura to issue a statement condemning the suicide bombing attacks carried out by terrorist group Nusra Front and its affiliates in Homs city.

He added that he also urged de Mistura to call on the other delegations to issue unambiguous statements condemning the attacks, stressing that any party that refuses to denounce what happened in Homs will be considered a partner in terrorism.

"I said before the session that what happened today will not pass unnoticed, and that what happened is a terrorist message for the Geneva talks, a message directed at the Special Envoy, the UN, the so-called international community, and all the participants in the Geneva talks. What happened was meant to cast a shadow over Geneva," Jaafari stated, adding that the attack in Homs "is not only a military terrorist act, but a political one as well."

Jaafari also told de Mistura that the delegation was searching for common ground in order to discuss other topics. “How can we talk with any party about any issue if they do not condemn terrorism?” he asked de Mistura, adding that Nusra’s goal is to derail the Geneva talks.

“We won’t fall into that trap, which is why we are keen on having partners that reject terrorism like the Syrian people do,” Jaafari noted, adding that he explained to de Mistura that dealing with the Nusra Front or ISIS or the other groups affiliated with them is not enough. Fighting terrorism must first start with confronting the sponsors of terrorism instead of giving them front-row seats at the opening session of the talks, he added.