Toxic gas attack on the Latamaneh hospital kills medic and patient, as a medical relief agency releases a report claiming over 100 hospitals were hit by Syrian or Russian strikes in 2016 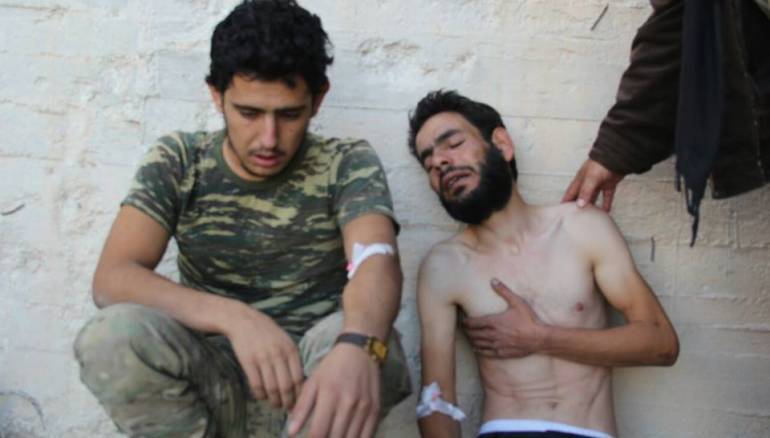 A doctor and a patient were killed Saturday when regime warplanes shelled a hospital in Latamaneh, central Hama province, with barrel bombs filled with toxic gas, activists and a local monitor said.

"The hospital is out of service now," the provincial health directorate announced in statement, amid cases of asphyxiation and a lack of medical equipment.

The attack comes as regime forces and allied militias press to halt a large rebel advance toward Hama which has so far taken about a dozen towns and villages and moved to within a few kilometers of the city and its military air base, the U.K.-based Syrian Observatory for Human Rights said.

For over five years, the use of chemical weapons on civilian neighborhoods and medical centers has continued by the Syrian regime despite investigations and calls to stop by the United Nations and the international community.

In a 90-page report released Saturday, the International Union of Medical Care and Relief Organizations, or UOSSM, also decried an "alarming scarcity" of specialized care and supplies.

The advocacy group says over 100 hospitals in Syria were hit by Syrian or Russian airstrikes last year, urging the "fortification" of medical facilities by adding reinforced concrete or blast-resistant windows.

The report says all 107 hospitals surveyed in December across seven regions were hit at least once by "direct or indirect airstrikes" last year – some as many as 25 times.

Three-quarters of hospitals surveyed were "makeshift hospitals," in buildings not initially designed to provide medical care, because real hospitals have either been destroyed or made inoperable.