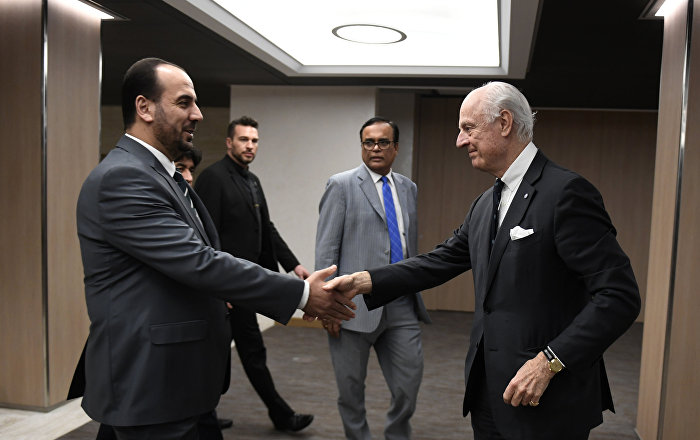 Syria’s opposition continues to deny any role for Syrian President Bashar al-Assad and his clique in a possible transitional period, as members urge the United Nations to designate more than 60 Iranian-backed militias fighting alongside regime forces as terrorist groups.

Nasr al-Hariri, head of the opposition’s High Negotiations Committee, said: "We will not accept, totally, we will not accept any presence, any shape of presence of Bashar al-Assad, from the beginning of that transitional period and in the future of Syria."

Speaking at a press conference on Monday following a meeting with U.N. Deputy Special Envoy for Syria Ramzy Ezzeldin Ramzy, Hariri stressed that the ouster of Assad is the first step of political transition in Syria.

"Today, we continued to discuss the political period and a constitutional declaration that will be in effect in the transition period," Hariri said.

Hariri went on: "We reiterated it at the beginning of the talks: The core of the political process is the requirement of the political transition, which is the transition from the regime. It requires Bashar al-Assad and his group, whose hands have already been stained with the blood of the Syrian people, to step down immediately as the premise of the transition. Meanwhile, they must be punished for their crimes.”

Meanwhile, HNC member Col. Fateh Hassoun said that the Iranian Revolutionary Guard Corps has recruited tens of thousands of mercenaries from Lebanon, Iraq, Afghanistan and Pakistan and sent them to fight alongside the Assad regime.

He noted that the IRGC has established more than 20 command and control centers in Syria, including in the districts of Sayyidah Zaynab and Yarmouk in Damascus, as well in the district of Shaykh Najjar in Aleppo.

These mercenary groups have committed many massacres and war crimes while fighting alongside regime forces across Syrian territory, Hassoun said, calling upon the international community to designate these militias as terrorist organizations.