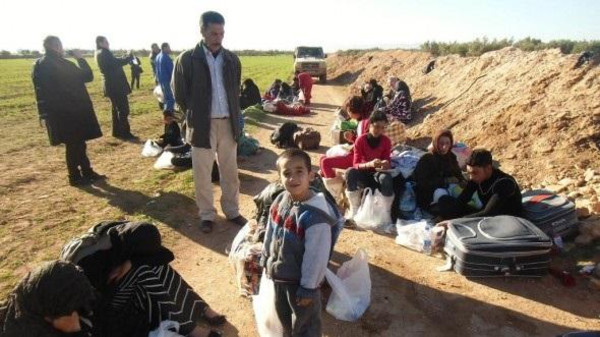 The hardship faced by eight Syrian families camped on the border between Algeria and Morocco has been ongoing for a month, as the harsh impacts of the desert climate has ensured a steady decline in the group's health amid a lack of medical care.

In video and voice messages sent to Turkish Anadolu agency, the families urged countries of the world and international organizations to intervene in order to get them out of the region.

The families, which live in worn tents made of fabric and blankets, lack access to the most basic elements of life, amid the snakes and scorpions with desert dust covering their faces and bodies.

One of the family members said in a video message that the children were enduring miserable conditions in the desert, without proper food or water, and called on world leaders, including Turkish President Recep Tayyip Erdogan to save them from the murderous desert.

She said their life is “a life of the wilds no one is content to live. We are burning bushes at night to stay warm and protect ourselves against animals.”

“Everyone is subject to illness and death here, young or old,” she added.

One of the women complained about the heat of the sun, its rays and the danger to the children, pleading to be saved before they meet their deaths.

The stranded Syrians called on the authorities of the two countries through social media to save them from the situation they have been enduring since the April 18.

Morocco and Algeria are exchanging accusations about responsibility for the arrival of the refugees, as Rabat says that these people have crossed Algerian territory to enter Morocco.

Algeria says that it recorded on April 19 an attempt by the Moroccan authorities to expel the refugees to Algeria. The Moroccan Interior Ministry issued at the end of last month a statement regarding the stranded refugees in which it accused its Algerian counterpart of “surrounding the Syrian migrants in inhumane conditions” near the southern border between the two countries.

In contrast, Algerian Foreign Affairs and International Cooperation Minister Ramtane Lamamra previously said: “This is a sensitive and specific humanitarian issue and it is not at all acceptable to trade in the tragedy of the refugees and our Syrian brothers.”

The Algerian Foreign Ministry in 2014 summoned Rabat’s ambassador to inform him of its rejection of what it called “allegations of expelling Syrian refugees to Algerian soil,” with the issue at that time creating a diplomatic strain between the two North African countries.