Government outlet SANA reports on discovery, which follows the expulsion of thousands of fighters and their families from the embattled neighborhood earlier this month 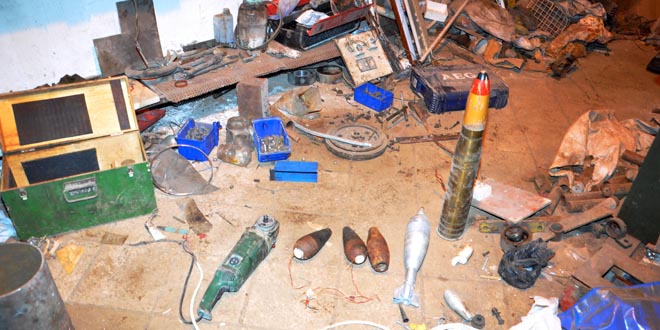 Authorities in the Al-Waer neighborhood of Homs uncovered on Tuesday a field hospital used by militants, a terrorist base and a workshop for manufacturing explosives. The discovery occurred during combing operations in the district after it was cleared of armed militants.

SANA’s correspondent said the authorities exposed a workshop for manufacturing improvised explosive devices (IEDs) and shells, adding that the workshop also contained heavy weapons, mortar launchers, and large amounts of food and health supplies which the terrorists had seized.

The correspondent said the authorities also uncovered a terrorist base of operations, which included a prison, in addition to a field hospital used by the terrorists.

Internal security forces entered Al-Waer on Sunday after it was declared safe from militants and were deployed to the Justice Palace, police department and other state institutions in the neighborhood.