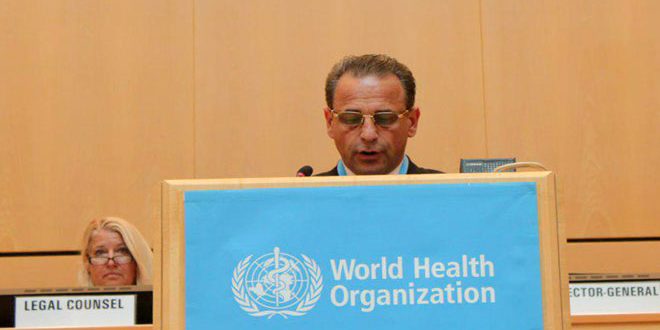 The minister’s comments came during his speech at the 70th World Health Assembly at the United Nations in Geneva, where he lauded efforts by Syrian hospitals and health centers for offering services to 51 million people in 2016 despite the economic siege.

Yazigi said that the sanctions have negatively affected the Syrian people and placed additional challenges on the medical sector in providing services, medicines and vaccinations for children.

The minister called upon the World Health Organization to offer technical aid to immediately lift the unfair siege imposed on Syria.

He said the ministry has also worked to rehabilitate Syria’s health-care institutions affected by terrorism as many health centers were reopened in Aleppo province recently.

“We look for further support by the WHO in the rehabilitation of the health infrastructures and the emergency system and in ensuring medical equipment,” Yazigi said.

The minister pointed out that many health workers were targeted while undertaking their duties during the course of the terrorist war on Syria, adding that scores of hospitals, hundreds of health centers and ambulances have been destroyed.