More families are returning to Homs because conditions in the camps in northern Syria are so bad, government media reports 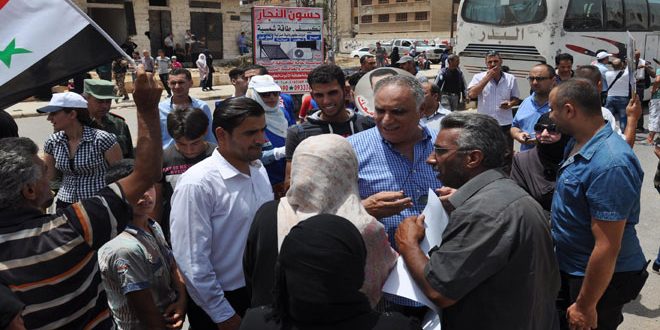 About 150 families from the Al-Waer neighborhood in Homs returned on Tuesday from the city of Jarabulus to their homes because of the lack of the basic elements of life and accommodation in the camps that were set up to host them there.

Those families had earlier left Al-Wear as part of the reconciliation agreement which was completed in May.

In a statement, Homs Governor Talal al-Barazi said that 14 buses carrying about 150 families, including 630 persons, had arrived in Homs coming from Jarabulus, adding that arrangements to complete the process of the locals’ return were taken a few weeks ago under the auspices of the Syrian government and in cooperation with the Syrian Arab Red Crescent (SARC).

He added that operations to ensure the return of all displaced Syrians to their areas are going on, particularly in Al-Waer, adding that this is the fifth batch of families from the neighborhood who returned from Jarabulus or Idleb, and that a larger number of families was scheduled to return, but the obstacles put up by the Turkish side through its armed groups have so far hindered their return.

In statements to SANA, a number of returnees said that tens of families in the camps wanted to return to their neighborhood.

On Monday, many residents from Al-Waer arrived in Tadef in the eastern countryside of Aleppo, coming from Jarabulus in preparation for their return.

On May 21, Al-Waer was declared fully secure after the completion of the reconciliation agreement reached in March to clear it of all armed groups and to restore state institutions, thereby making the entire city of Homs fully clear of weapons and militants.