President says Syria is emerging triumphant after enduring a campaign to destabilize the country's security and economy, official media reports 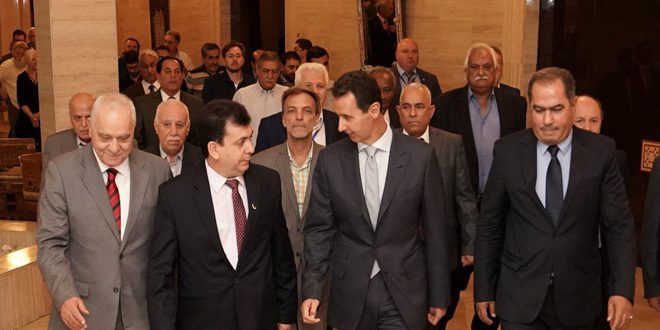 President Bashar al-Assad declared that Syria is moving steadily toward victory despite the terrorist, military, economic, and media war that has been targeting the country for nearly seven years.

The president's comments came during a meeting on Wednesday with participants of the International Trade Union conference which was held in the capital Damascus. According to organizers, the conference aimed to promote "solidarity with workers and people of Syria against terrorism, blockades, economic sanctions, and imperial interventionist policies."

During the meeting, Assad spoke of the importance of popular organizations in raising awareness of the dangers of terrorism and the negative effects of the illegal sanctions on Syria, which were imposed by superpowers which seek to control those who are committed to sovereignty and independence.

For their part, delegation members expressed support for the people of Syria in their battle against terrorism and the economic embargo, stating that their fight is important for the region and the world as its repercussions constitute a turning point in human history.

The visitors stressed the need to unite all sides that value peace and international law in order to fight terrorism and respect sovereignty and the right to self-determination.