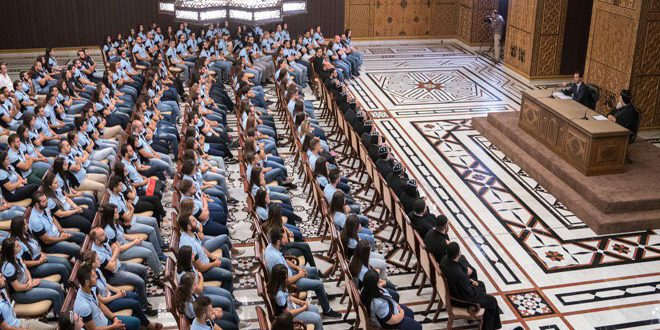 President Bashar al-Assad has honored Syria's Christians as being core to the country's diversity and existence.

Assad's comments came during the 'General Assembly for the Syriac Youth in Syria,' a forum highlighting the deeply-rooted role of the Christian and Syriac presence in Syria as a basic element in the national structure.

Assad affirmed that such forums send a clear message, domestically and internationally, that Syria's Christians are not guests or migrating birds, but are the basis of the homeland’s existence. He added that without them, there is no existence for the diverse Syria that we know.

President Assad added that the failed efforts to target Syria's Christians emanates from an extremist mentality that refuses to acknowledge the existence of other faiths. Syrians, he said, have not and will not allow anyone to sabotage the country in this way.

Also attending the event was the head of the Syriac Orthodox Church, Mor Ignatius Aphrem II.