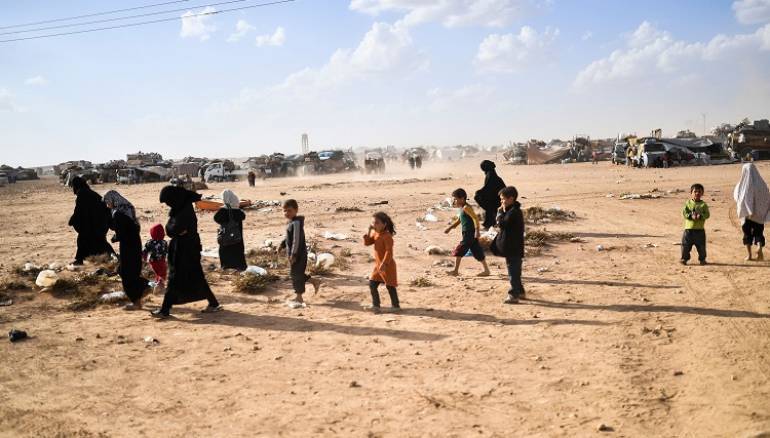 A pro-regime militia commander has threatened to carry out brutal reprisals against civilians in Deir-ez-Zor days after the capture of eastern province from the Islamic State (ISIS) organization, according to footage surfaced on social media.

In an online video statement fueled by hate speech, the head of the Civil Defense Forces paramilitary group in Deir-ez-Zor, Firas al-Iraqiya, warned fleeing civilians not to return home or they would be killed.

The statement was similar to threats by another former military commander in Deir-ez-Zor, Issam Zahreddine, who was killed by a landmine on Oct. 18.

Local activists have called on the international community to rescue civilians trapped in the last ISIS-held pockets of the province as Syrian and Russian warplanes step up their aerial bombardment.

Locals from the town of Hwaijet Qatea in the Euphrates Valley are said to be fearing an imminent massacre by remaining ISIS forces.

On Thursday, the Syrian army declared victory over ISIS, saying its capture of the jihadists’ last town in the country, Albu Kamal, marked the collapse of their three-year reign in the region.

The army and its allies are still fighting ISIS militants in desert areas near Albu Kamal near the border with Iraq, the Syrian army said.

But the capture of the town ends Islamic State’s era of territorial rule over the so-called caliphate that it proclaimed in 2014 across Iraq and Syria, where millions suffered under its hard-line rule.

Meanwhile, about 3,000 displaced people have arrived to the Kurdish Democratic Union Party-held camps in the province of Hassakeh after fleeing Albu Kamal, activists said on Saturday.

Some Iraqi families were among those reported to be part of a group of displaced who have settled in the deserted Al-Hawl camp controlled by the powerful Kurdish militia.