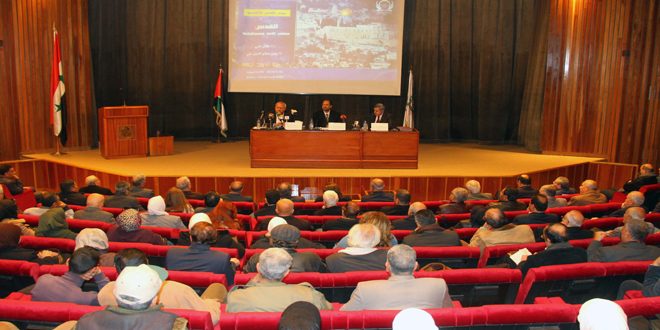 Presidential political and media advisor Bouthaina Shaaban on Wednesday said that Zionism is linked to terrorism, and as such “the war against terrorism is also a war against Zionism.”

Shaaban’s remarks came during a press conference following a political seminar held by the Syria branch of the Al-Quds International Foundation at the Al-Assad National Library within the activities of Al-Quds (Jerusalem) Cultural Day.

The advisor affirmed that resisting occupation of Palestine and terrorism in Syria are the same struggle against the same enemy, adding that the historical documents presented in the seminar illustrate the plans of the Zionist enemy (Israel) against Syria from many years ago, which were the cause of the current events.

She explained that countries which support terrorism, including the Turkish or U.S. invading forces, came to replace terrorism in northern Syria, and mobilized their forces when the alliance of resistance began to win the battle against terrorism on Syrian soil.