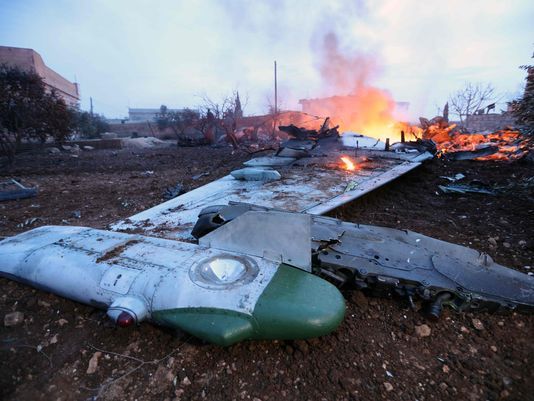 – The Syrian regime continued shelling the towns of Eastern Ghouta on Tuesday, killing 25 civilians and injuring dozens. Meanwhile the U.S.-led international coalition's aircraft targeted the town of Al-Shahfa in the suburbs of Deir-ez-Zor, leaving 13 civilians dead. Three displaced people were also killed and others were injured in the Atma refugee camp in Idleb as a result of shelling by the Kurdish People's Protection Units (YPG).

– A Turkish military observation point in the countryside of Idelb was bombed by Iranian forces, according to activists. The bombing led to the death of a Turkish soldier and wounded others. A military source said the Syrian regime "brought air defenses and anti-aircraft missiles to the seam areas in the countryside of Aleppo and Idleb."

– The Russian Defense Ministry said that the Russian pilot whose jet was shot down by rebels in Idleb "committed suicide so as not to fall into captivity." The ministry added that the pilot, after evacuating the plane under heavy fire, blew himself up with a grenade when he saw the militants approaching him.

– Iran has asked Turkey to halt its military operation in Afrin, which began more than two weeks ago, and called on it to respect what it called "the sovereignty and unity of the Syrian state." An Iranian official said the operation launched by Turkey in Afrin "could cause the return of insecurity and terrorism to Syria."

– In economics, the sell price of the dollar on the black market mounted to 488 Syrian pounds, while the purchase price rose to 466 Syrian pounds.