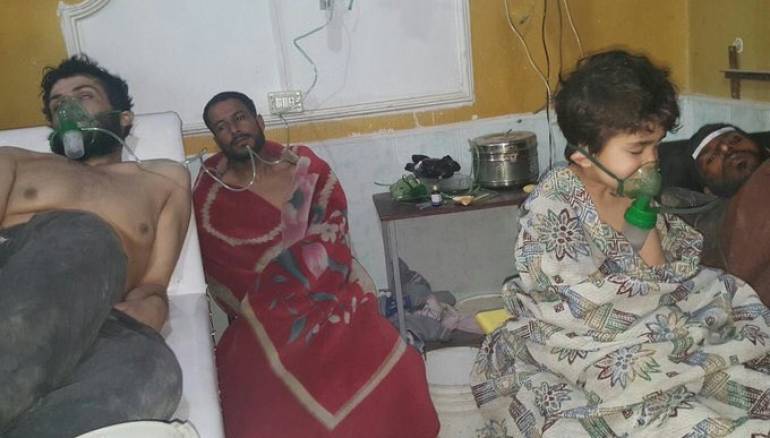 The Assad regime on Sunday attacked the besieged Damascus suburb of Eastern Ghouta with chlorine gas, according to the Syrian Civil Defense (White Helmets), a pro-opposition Syrian search and rescue agency.

One child was killed in the attack which targeted the town of Al-Shifuniyah, the agency said on its official Twitter account, adding that widespread suffocation occurred among civilians including two of its volunteers.

Hospital officials in the nearby city of Douma confirmed to Anadolu Agency that 16 people had been poisoned in the chemical attack.

The regime forces have attacked Douma three times with chlorine gas in the last two months.

Earlier on Sunday, regime forces also mounted air and artillery attacks in the towns of Douma, Harasta, Al-Shifuniyah, Kafr Batna, Saqba, Beit Sawa and Al-Marj, according to a White Helmets source who spoke on condition of anonymity for security reasons.

Meanwhile, in northwestern Idelb, residential areas in the city of Jisr al-Shughur were also reported to have come under heavy shelling by regime forces.

Regime warplanes also struck the town of Kafr Zita in the central province of Hama, the source said.

The death toll from the attacks rose to five, including a woman and a child.

The attacks come after the United Nations Security Council adopted a resolution on Saturday calling for a 30-day cease-fire in Syria to allow for humanitarian aid deliveries.

The resolution, prepared by Sweden and Kuwait, also calls for the medical evacuation of 700 people, particularly in Eastern Ghouta, which has been under siege for the last five years, preventing the delivery of food and medicine and leaving thousands of patients in need of treatment.

Home to some 400,000 residents, Eastern Ghouta falls within a network of de-escalation zones — endorsed by Turkey, Russia and Iran — in which acts of aggression are expressly prohibited.