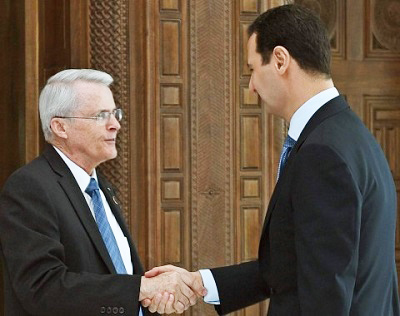 American Senator Richard Hayden Black [Black is a senator in Virginia State and not a U.S. senator – The Syrian Observer] has said that increasingly rash actions risk escalating into nuclear war, stressing that the allegations of the use of chemical weapons by Syrian government are a hoax.

In a statement to the Syria Times, the senator said: “U.S. ordered a brutal attack on Syria. Children’s arms and legs will be blown off; Syrian soldiers will be blinded and crippled. The war is a disgrace. Increasingly rash actions risk escalating into nuclear war.”

He stressed that Syrians wouldn't possibly use gas, since terrorists were quickly surrendering.

“Syria certainly wouldn't gas civilians and leave soldiers untouched. It was an obvious hoax,” the senator added, posing the following question: “How many wars will we fight? I fought for this country, but this war is immoral.It is an unjust war of aggression.”

On April 9, the senator published a post on his Facebook account saying: “I’am sick of us bombing Syria every time Al-Qaeda’s ‘White Helmets’ stage another false flag event. Some gusty journalist should ask why all the gassing victims are civilians and never the terrorists themselves.”

He told the ST last February: “The CIA, MI-6 [The Secret Intelligence Service in the U.K.] and other coalition intelligence agencies make claims of poison gas whenever they need to prop-up public support for military action. The claims have always been false, but the secretary of defense just stumbled and admitted that they were false.”

It is worth noting that Black spent 32 years in military service. He flew 269 combat helicopter missions in Vietnam and also fought in fierce ground combat as an officer in the elite 1st Marine Regiment. He was wounded and his radiomen were killed. He eventually served at the Pentagon. He has served 14 years as an elected official in the Virginia House and Senate. In 2015, he was designated an enemy of the Islamic State (ISIS), which called him "The American Crusader."