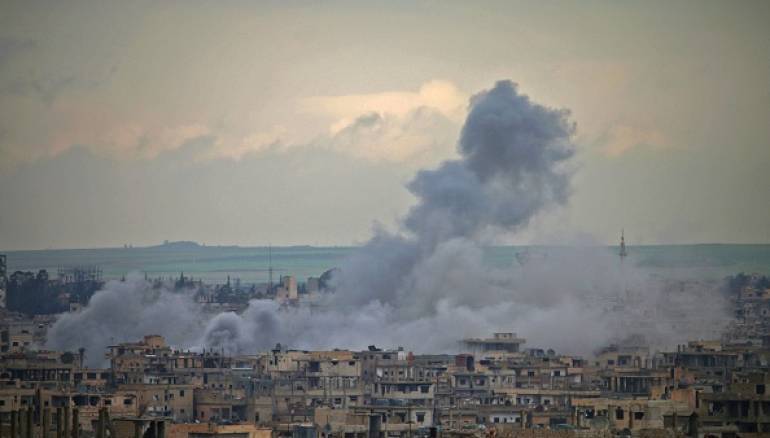 Daraa-based activist Diaa al-Hariri told Zaman al-Wasl that no casualties were reported in the aerial attack on the southern province, amid a state of panic that forced some families to flee their areas.

The southern area around Daraa province is one of the main parts of the country where large populations are still under the control of rebels opposed to President Bashar al-Assad.

This week, the U.S. Embassy in Amman warned the key rebel alliance in Daraa of taking any military action against the regime forces that might undermine the de-escalation zone agreement, a Saudi daily reported.

According to the Asharq Al-Awsat newspaper, a letter was sent by the U.S. Embassy in Amman to the Southern Front, in which the embassy asserted that rebels should refrain from giving the regime army any pretext to end the cease-fire agreement which was reached last July.

The warnings to the Southern Front coincide with the regime's mobilization at the gate of Daraa in preparation for launching a sweeping attack on the city.

Sources told Zaman al-Wasl last March that Russia had warned the regime against launching any attack on rebels in southern Syria, saying it will not provide aerial backup if regime insists on violating the cease-fire deal.

Russia, which backs the Assad regime, and the United States, which has backed rebel forces seeking to topple the president, met secretly in Jordan in June and announced a cease-fire in Syria's southwest a month later.

The truce reduced fighting there and was meant to lead to a longer-lasting de-escalation, a step towards a full settlement.

Rebels have long feared the regime army will return to attack them once it has consolidated gains in the north and other areas. Rebels say the de-escalation zones free up the Syrian army to make territorial gains elsewhere.

Several skirmishes have been reported in last few months between the small jihadist faction and rebels.

Jaish Khaled bin Walid was formed in May 2016, and is an alliance of several jihadist groups, the largest of them the Yarmouk Martyrs Brigade, which is listed by Washington as a terrorist group.

The militant group seeks to open a corridor for fellow fighters who seek to flee the last ISIS pockets in the southern neighborhoods of Damascus.

Well-informed sources said Thursday that senior ISIS commanders have fled southern suburbs of Damascus to Daraa, as regime forces shelled their last pockets in the capital, preparing the ground for a possible assault on the militant stronghold.

Sources said a smuggling network related to the Syrian regime and intelligence services has been facilitating the move of ISIS commanders.

The Syrian Observatory for Human Rights said Jaish Khaled bin Walid is estimated to have some 1,200 fighters, and controls territory in western Daraa province, along the border with the occupied Golan Heights.