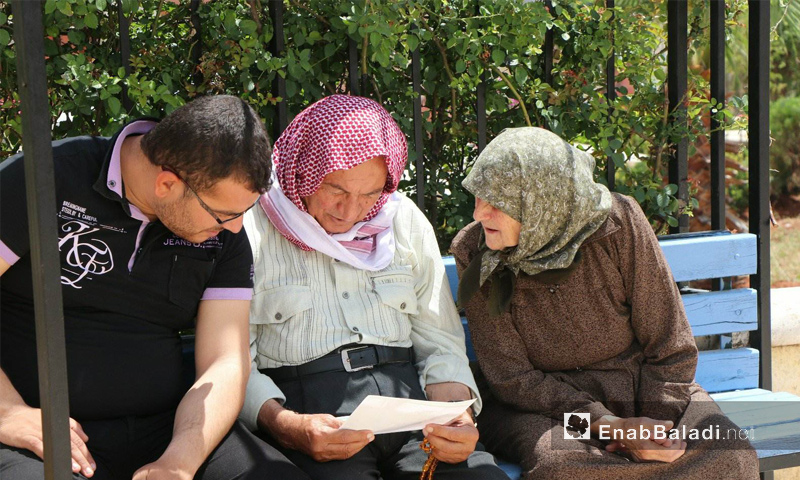 Ahrar al-Sharqiya faction has launched a campaign in the Afrin area of the Aleppo countryside aiming to bring about a rapprochment between Arabs and Kurds living there.

The campaign “We are Family”, according to its organizer Muataz al-Husseini, will last throughout Ramadan and hopes to find a direct channel between civilians, fighters and the local administration in order to identify and resolve their problems regarding theft, prisoners and services.

Husseini told Enab Baladi on Wednesday, May 16, that the campaign had various aims, including bringing together residents of Afrin and informing them about Operation Olive Branch and providing rights to its residents after the recent violations that occurred during the offensive to take control of the city.

Turkey launched a military operation against the Kurdish People’s Protection Units (YPG) in Afrin on Jan. 20, with support of the Free Syrian Army, and was able to take control over the whole area in about two months.

The area has received hundreds of displaced people from the Damascus countryside over the last few days, who have settled in camps around Jindires, while some have relocated to the city of Afrin.

The entry of the displaced into Afrin has provoked widespread discontent from Kurdish activists, who believed that the civilians who entered Afrin have taken ownership of houses that belonged to the city’s original residents, who have been prevented from returning.

The Kurdish National Council at the start of April published a statement in which it said that it had inquired about “practices of the factions belonging to the Free Syrian Army against civilians, including theft, looting and considering Kurdish property to be the spoils of war, confiscating the houses of residents and settling their families in them, which creates obstacles for returning displaced people and even prevents them from returning.”

The statement accused the Turkish army of “providing the means for them to do this” and pointed to “reports indicating that dozens of families and militants fleeing from eastern Ghouta had been settled in the towns and villages of Afrin.”

According to Husseini, the current campaign aims to put an end to rumors and distorted campaigns which are sowing strife among the communities of the Syrian people and breaking the social fabric.

He pointed out that it coincided with an attack to distort the image of the FSA and do away with the “brutal” image of the YPG, as he put it.

Seven local councils have been formed in the Afrin region over the past few days, including the temporary city council in mid-April, followed by the Belbel, Jindires and Sharran councils, and then the formation of the Al-Sheikh Hadeed and Rajou city councils on the 29th of the same month.

The work of councils focuses firstly on rehabilitating the region’s infrastructure and its villages, along with providing basic services in terms of ovens, electricity, water and cleaning.

This is in addition to returning displaced people and original residents to their homes and providing livelihoods for families in the area, according to the director of council affairs, Youssef Nirbani, in a previous interview with Enab Baladi.