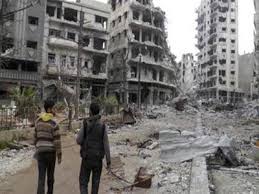 A military source stated that the individuals who appeared in photos and videos being arrested for looting one of the liberated areas were not Syrian Arab Army soldiers; rather they were wanted by the authorities.

The source told SANA that the photos and videos being circulated, which show the arrest of individuals claiming to be from the Syrian Arab Army, who were arrested on charges of looting one of the recently liberated areas, were confirmed not to be soldiers or from the military establishment and have no affiliation to it whatsoever by General Command of the Army and Armed Forces.

The source said that the people shown in the photos and videos are wanted individuals whose names had been sent to all checkpoints a while ago.

Social media sites recently circulated photos and videos showing individuals in military uniforms, as they were being arrested for looting one the areas recently liberated by the Syrian Arab Army.