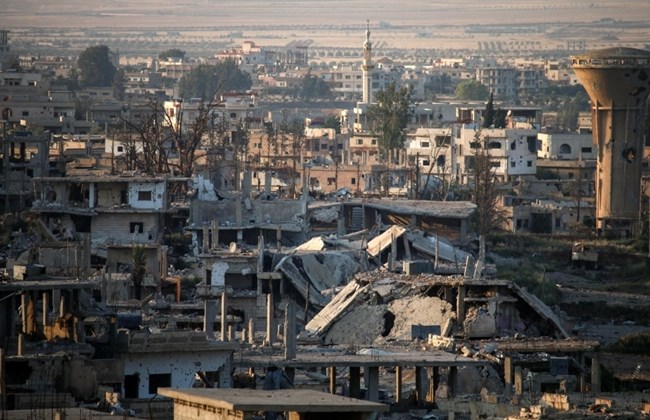 The Foreign and Expatriates Ministry sent a letter to the UN Secretary-General and the head of the Security Council regarding the bombing of civilian houses in Tal al-Shayer in Hassakeh province by US-led International Coalition warplanes.

The letter said that this crime committed by the illegal coalition claimed the lives of 12 civilians from one family, and that the coalition also committed a similar attack against innocent civilians at an Iraqi refugee camps in Khuwaibra village southeast of al-Shadadi, claiming the lives of 18 civilians.

The Ministry stressed that the coalition’s persistent massacres, war crimes and crimes against humanity, along with its continuing support for terrorists and its exploitation of terrorists and separatist militias, all show that the Security Council is negligent in enforcing international law and in putting an end to the coalition’s hostile plots that target Syrian sovereignty and territorial integrity and seek to prolong the crisis.

The letter stressed that Syria calls on the Security Council to shoulder its responsibilities by condemning such massacres and working to stop them from reoccurring, as well as working to end the hostile and illegal presence of US and other foreign forces in Syria.

Local sources told SANA’s reporter that 12 members of Hassoun al-Basha’s family were martyred and two others (father and his son) injured on Tuesday, in a new massacre against the locals in the village of Tal al-Shayer in the southeastern Hassakeh countryside, a crime which was perpetrated by the US-led International Coalition.