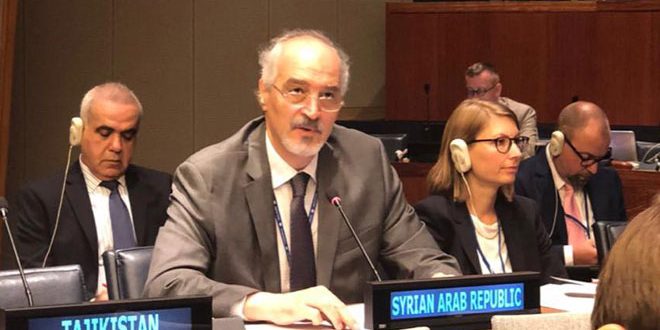 Syria’s Permanent Representative to the United Nations Dr. Bashar al-Jaafari on Tuesday called on other nations to face the challenge represented by the transporting and smuggling of small and light weapons to terrorist groups and organizations, indicating that some states were directly involved in the transport of weapons to terrorists in Syria and were spending billions of dollars to facilitate it.

In a statement at the 3rd UN Conference to Review Progress Made in the Implementation of the Program of Action to Prevent, Combat and Eradicate the Illicit Trade in Small Arms and Light Weapons in All its Aspects, al-Jaafari said that the phenomenon of the illicit trade in small and light weapons represents the deteriorating ethical reality of relations in the world nowadays.

He pointed out that some Arab states such as Saudi Arabia and Qatar are still spending billions of dollars to buy weapons and transport them to the terrorist groups and there are some regional states such as Turkey which is supplying terrorists with all types of care, training, protection and weapons.

Al-Jaafari added that there are some Western states such as the US, France and Britain which have spent billions of dollars to provide all types of weapons, training and financial support to terrorists who exist on Syrian lands including the terrorists of Jabhat al-Nusra and Islamic State.

He clarified that the Zionist entity is still transporting small and light weapons to ISIS and Jabhat al-Nusra and other terrorist organizations in the disengagement zone in the occupied Syrian Golan.

In his statement, al-Jaafari called upon member states, particularly those which are involved in smuggling and transporting weapons to terrorist groups, to shoulder their responsibilities and to completely adhere to the relevant international pacts, the UN Charter and international law and to stop the smuggling of weapons.