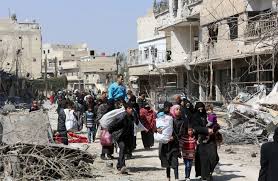 The National Commission for the Affairs of Displaced People and Refugees, which has recently been formed by the Syrian Coalition, held a teleconference with heads of the provincial councils in Damascus and Aleppo Governorates to discuss the major challenges facing the people who were forcibly displaced by the Assad regime.

Head of the Commission Fadi Ibrahim said that the Coalition would spare no effort to ensure that the return of refugees is considered a legitimate, basic right that should not be subject to negotiations as well as to ensure their rights to safely return to their areas and homes.

Ibrahim stressed the necessity of asserting the rights of forcibly displaced people and refugees, especially the property of civilians, through the establishment of a database of all civilians who left their homes and areas because of the regime's threats. He described this as an important step to confront Law 10, through which the Assad regime is seeking to perpetuate forced displacement and demographic change.

The Coalition’s political committee established the National Commission on the Affairs of the Displaced People and Refugees with the aim of working to protect the rights and property of the displaced Syrians and to convey their voices and demands.

The Commission also works to inform other nation states, organizations, bodies and associations of the reality of displaced people and refugees as well as to mobilize international support through the holding of workshops to highlight their situation in refugee camps.