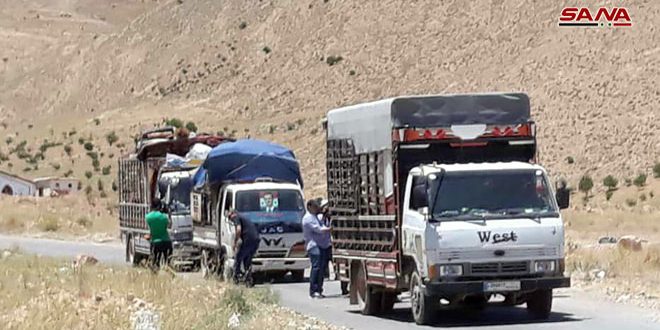 On Saturday, hundreds of displaced Syrians returned from Lebanon through the al-Zamrani crossing into the area of al-Qalamoun in the Damascus Countryside, as part of a framework of efforts exerted by the Syrian Government to restore normal life to areas liberated from terrorism by the Syrian Arab Army.

A third batch of displaced Syrians in Lebanon that follows the scores of other families, mostly women and children, arrived at noon at the al-Zamrani crossing, having come from the Lebanese town of Arsal. At the crossing point they waited for the buses that would transport them to their villages and towns in the Damascus countryside.

The delegate added that Syrian Arab Army personnel received the returnees who had previously fled their homes due to terrorist activities, before the army, in cooperation with allied forces, restored security and stability to the area.

A number of the returnees expressed thanks for the great sacrifices of the army which restored security and stability to their villages and towns.

They called upon all Syrians displaced by terrorism to return to their homes and to contribute to rehabilitating what has been destroyed by terrorists.