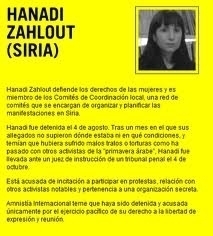 Zahlouht is a vigorous human rights and women’s rights activist born to an Alawite family in coastal Syria in 1982. She is a member of the Local Coordination Committees (LCC), a grassroots network of groups who organize the protests in Syria’s revolution for freedom and democracy.

In an interview with All4Syria, Zahlout talked about the prize and the speech she will deliver at the upcoming acceptance ceremony, as well as important challenges currently facing the feminist movement in Syria.

Q: How did you receive the news of your prize? How did you feel and who was the first person that came to your mind?

A: I received the news through a telephone call from a friend. I felt shy; it was embarrassing to  be Syrian today and receiving a prize for your struggle in human rights field, because every Syrian except me deserves it. About 100,000 Syrians have sacrificed their lives for their right to freedom. This is a great nation and every individual biography is small if compared to the whole. Frankly, the first person who came to my mind was journalist Mazen Darwish, my beautiful friend who has been detained since more than sixteen months. Mazen was captured because of his defense of free speech.

Q: Is the prize a turning point for you?

A: I don’t know if it is going to be a personal turning point for me, but what I am sure of is that all Syrians are living a turning point in their personal and public life, and I am one of them.

Q:  Will you deliver a speech in the presentation ceremony and to whom you will address it?

A: Yes, I will deliver a speech on behalf of Syrian people (they may excuse me for this) and it will be addressed to non-Syrians, to the sleeping international community, to our opposition which has failed to represent our people in a way that reflects their sacrifices. I will try to be the voice of the Syrian people for a few minutes, to speak about what they wait for from abroad, about the Syria which they dream of, far from detention and killing and destruction. Syria as a safe country in which children grow up and play, the youth work and women have the keys to the future in their hands.

Q: You were detained three times because of your revolutionary activities, and every time you were have gone back to the squares to protest. Now that you are outside Syria, how do you feel about living abroad?

A: I had no other choice. I tried to stay in the country with my friends and with those I was working with, until it became impossible. My health situation had deteriorated; I was hiding in a basement in Rukn al-Din and physical therapy became a daily necessity. I felt that I had become a burden to my friends and I couldn’t enter a hospital, so I preferred to go out so I might be more useful abroad, writing about what I had seen during my detention in detail. This is why I live abroad. I sit with the memories and talk with them and write them all as a document for history. Thinking that you are living abroad and cut from your country, however, is exhausting and overwhelming. You feel you are handcuffed listening to the bad news coming from your friends far away. Working on the details may help overcome this feeling. Maintaining your connections becomes important here, as the words you say to a dear friend may help, and working on getting the most benefit from what is available here is our responsibility. It remains a temporary though –  our country remains our country and will always wait for us.

Q: What is the image that comes to your mind the most?

A: The picture of the first demonstration from Umayyad Mosque Marjeh Square on 15 March, 2011. I remember how suddenly I found myself on the pavement – the rush of the demonstration was like a torrent. The organizers headed to Marjeh. Whether that was intentional or not is still something I don’t know. What I do know is that it was a marvelous demonstration, and that suppression was at its highest; they were using sticks, hitting and kicking. It was the contradiction that most comes to my mind: the honor of the demonstration next to the vulgarity of their suppression.

Q: How do you evaluate the role of Syrian woman in the revolution? And what is your opinion of the level of their participation in the oppositional masses?

A: It is needless to remind us of women's role in the revolution. Despite the detention, killing and abuse women have suffered, despite the absence of their men, Syrian women have played a role that is no less heroic, especially in the presence of children they look after and try heroically to protect. History will immortalize stories about Syrian women's struggle. But on the other hand, we find a shameful percentage of women represented in the oppositional groups and until now we have yet to find a political project that speaks plainly and explicitly of the citizenship state: A state that guarantees equality among citizens regardless of their gender or race or religion, a state that takes into consideration only the fact of their being Syrian. There is a real need to correct women's representation and a need to think of feminism as a project of this citizenship state, otherwise it will mean betrayal of the sacrifices of half of Syrians, or even all Syrians, I would say.

Q: You write a lot on your page under the same pseudonym Hayam Jameel. Why are you still using the same name even though you now reside outside Syria?

A: I added my true name to my pseudonym. Frankly I don’t want to delete this pseudonym, as I am known by it. The name has credibility among people and I used this name before the revolution, since 2009. It is linked to my free thinking, far from political and social restraints. My very existence and freedom are linked with it too.

Q: The Syrian poet and writer Hanadi Zahlout no longer writes. Where is she now?

A: I do write; I am recording my detention experiences. I have finished them and I am about to publish them in a book. I have already published parts of them on my Facebook page. This would be my first book and I hope to start writing my second when there is freedom in all Syrian lands. God willing, that it is not far from now.