A shortage in bread continues to plague regime held areas, as shocking pictures of people in cages angers the public reports Shaam News. 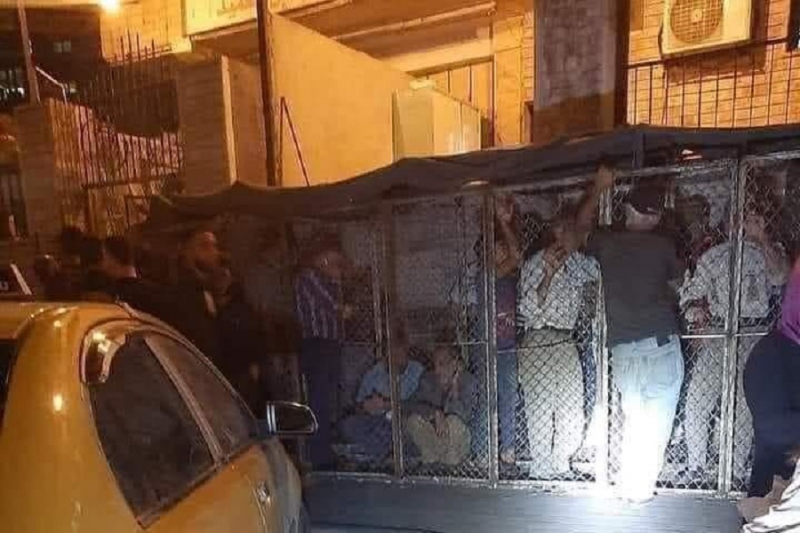 Pro-regime media pages shared a photo showing a number of citizens being kept in an iron cage, as a way to organize the process of waiting in front of the bakeries. The picture sparked widespread controversy, which was clearly stated in the comments on the post, and comes at a time when the regime has been giving masterclasses in the humiliation of civilians.

Pro-regime pages indicated that the controversial photo was taken in front of Ibn al-Ameed Bakery. Several bakeries had previously taken a similar step, such as the al-Ameen Bakery in Old Damascus, pursuant to decisions taken by the regime’s Bakeries Directorates.

The photo was popular on pro-regime pages, which confirmed that it was in front of one of the bakeries in Damascus. In the comments, people attacked the media outlets that published the photo, asking them to weigh in on this novel method, an additional measure added to the regime’s policy of humiliating citizens.

The regime justified the method of cages by pointing out that it is the best way to separate men and women from members of the regime’s army.

Pro-regime newspaper, Al-Watan, reported that the bread crisis in Hama is at its apogee and that mechanical bakeries are witnessing severe overcrowding. Some people are forcefully storming bakeries to acquire a few bags of bread.

People said that bakeries are agreeing to sell only one bag of bread [per person], containing only six loaves. Others confirmed that they bought, a bag for 3,000 Syrian pounds from some private bakeries and from Assi Square in al-Hader al-Sagheer, well above the price quoted in other bakeries.

Director of the General Bakeries branch in Hama, Ibrahim al-Saeed, told Al-Watan that the mechanical bakeries did not have any shortage when it comes to flour or other bread-making ingredients, stressing that the bakeries have been receiving their allocations of flour and using all of it. They received flour today, just as they receive every day, according to Saeed.

The regime-controlled areas are witnessing a major crisis to obtain basic ingredients, following the decisions to reduce the allocations, which has resulted in long queues, while the price of a single bag of bread reached 700 Syrian pounds, a significant price increase, in addition to shortages and overcrowding at the bakeries.

Deputy Minister for Internal Trade and Consumer Protection, Rifat Suleiman, revealed that a new mechanism is being adopted, namely selling bread through the smart card, whereby bread is sold every two days instead of every day, and four bags would be sold to each family [at a time], under the pretext of trying to reduce overcrowding at bakeries.

The economic crises in the regime-controlled areas are exacerbating, especially the fuel and bread crises.

While the Assad regime uses the excuse of sanctions to justify the situation, its Shabiha have been among those queuing up in front of gas stations and bakeries, which has led to shootings and casualties in Aleppo and Lattakia, according to information previously published by pro-regime pages.