Rahaf al-Ja’a trained as a midwife, but now uses her skills to spread awareness about the spread of the coronavirus and means to protect yourself writes Zaman Al-Wasl. 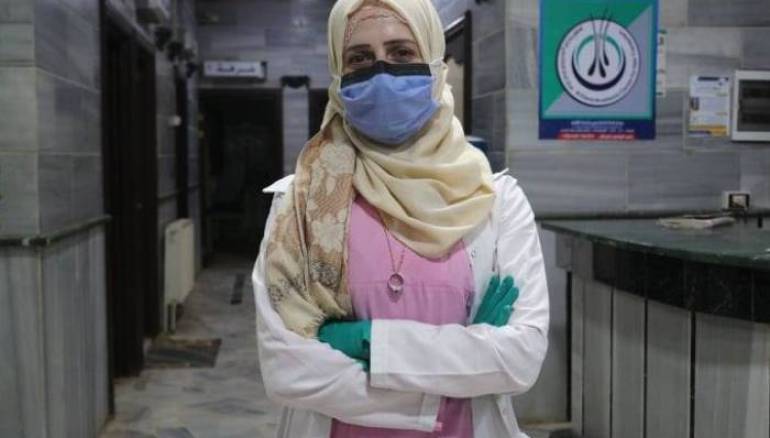 On Jul. 7, 2017, Rahaf al-Ja’a lost her husband, who died during a bombing raid leaving her with two children to struggle against the difficult circumstances of war in Syria.

Like thousands of Syrian women, Rahaf, 24, fought to leave her mark in her community and to overcome the obstacles that war and revolution have thrown her way, going back to study midwifery at the Faculty of Medicine in Idleb.

Ja’a worked with the Syrian Expatriates Medical Association (SEMA) as a healthcare provider and in health awareness and malnutrition in densely populated areas, especially camps, in addition to gaining experience through her studies and work in a clinic as a midwife.

“The most prominent legacy of the war are ignorance and poverty”, Rahaf said. She has worked for two years to raise awareness among Syrian women, on the internet and through her visits as part of the voluntary awareness campaigns that she conducted in camps in northern Syria.

“With the spread of the novel coronavirus in neighboring countries, the rising number of infections recorded in the liberated areas, and the lack of awareness among civilians, I took it upon myself to provide preventive advice and guidance to the affected communities, especially the displaced in border camps and random camps scattered on the outskirts of villages and other towns within the province,” she explained.

One of Rahaf’s first visits was to a camp near the town of Sarmada, in northern Idleb. Despite the limited time between raising her children, her work in the private clinic, and her studies, she conducted individual and group awareness sessions as the risk of infection rose, especially in overcrowded camps.

Rahaf even worked with a media agency to produce an educational awareness program on the pandemic, and the dangers that people may face if they do not follow the preventive measures provided. The program, the first of its kind in the liberated Syrian north, will be broadcast in a few days on social media sites to raise awareness and contain the spread of coronavirus. Other educational programs will be made in accordance with the situation in these areas.

However, she explained that if the virus spreads considerably in the upcoming days, all awareness campaigns would be pointless, and that medical teams working in Idleb and the countryside of Aleppo must move the infected into isolation centers and urge people to self-quarantine in cooperation with local authorities. “I will be the first to volunteer in isolation centers, and to provide medical care and treatments for the infected.”

Rahaf previously used her personal Facebook account to provide lessons, awareness tips and advice for mothers, and pregnant and breastfeeding women, since midwifery is her field of expertise. Rahaf said that her aspiration is to be an active member of society during the current difficult circumstances, providing all the knowledge she gained to the largest possible number of Syrian women.