Hundreds of true stories are quickly making Syria the number one market for organ sales. 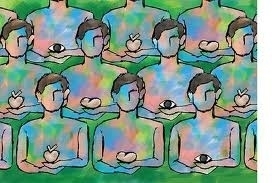 As if Syria was lacking tragic stories, reports of human organ trafficking are increasing enormously from inside Syria, from both regime- and opposition-controlled areas. Not unlike many war stories coming from Syria, is that of Amal Naser, 22. She has lost her entire family, some of whom have been held in the regime’s underground prisons, while others were killed by mistake in fighting, or by an explosion. In early 2012, Amal was tricked into selling one of her kidneys in exchange for being smuggled to an EU country.

After undergoing medical tests, she was driven to an unknown location where they harvested her kidney, gave her some kinds of medicine, and told her that someone would come in a couple of days to drive her to Lebanon, where she would be smuggled to Europe. But since then she has been living in a refugee camp near Balbk, abandoned.

Amal's story is one of hundreds of similar stories that are quickly making Syria the number one market for organ sales.

Organs and the honorable thief

Today’s organ trafficking incidents take us back to 2008 when a thief crashed into a house in a luxurious Damascus suburb and discovered a warehouse full of frozen organs, ready to be sent around the world. The thief turned himself over to the authorities and reported the place. After monitoring the house for hours, police managed to arrest the criminals, thus explaining a series of mysterious attacks going back years. As the story unfolded, the names of high-ranking members of the Syrian regime began to pop up and the story suddenly disappeared from the local news.

Who is to blame for these criminal acts? It is a lingering question. These incidents occur throughout Syria, and the only truth is that people are losing their organs and others continue to be killed for that purpose. And the world still looks upon this crisis as if it is just another number in so many of the statistics about the Syrian conflict’s casualties. The truth is… everybody is responsible. In the northern regions where Islamic militants are taking control, many patients’ medical charts in hospitals and clinics have been stolen, making the job easier for criminals.  Dr. Mohamed Aboud from Idlib described how awful the situation is there, saying that private information is being sold in neighboring countries like Lebanon and Turkey, and that there’s proven collaboration between Islamic militants and Shabiha from the regime. Dr. Aboud mentioned that some of the people who were kidnapped for the purpose of organ harvesting were requested by name, that many people were found thrown away without kidneys, and that secured paths were cleared by both sides. When we asked Dr. Aboud about the opposition, he said that simply not talking about this is a crime in itself.

Other stories are coming from Damascus.  Cathrine K., who just arrived from Damascus, said that gangs are fine-tuning their methods. She quoted one of her relatives who works at a hospital in Damascus, who said he had witnessed many cases of wounded people arriving to the hospitals with organs already stolen—the strange thing is that those people are some of the survivors of the bombings and mortar shelling that have become regular stories on the news about Syria.

The word on the street is that there are gangs that rush to the place of an explosion, pose as ordinary citizens or paramedics pretending to help the victims, and take advantage of the situation to do their job.

Back in the areas under Islamic fighters’ control there are many stories about doctors from Syria, Turkey, and even Europe. "Abo Sheirkho," who was a witness when his nephew "donated" (as he described) a part of his body, said that in some cases those doctors come from abroad to Syria to personally oversee the process.

Crisis for the organ market

Dr. Mohammed Fouad, who is currently working at the AUB hospital, was initially surprised by the growth of the phenomenon. He said that organ trafficking existed earlier in Syria with a few incidences but it was not a phenomenon, and it was limited to kidneys and corneas, which do not require the complicated tissue matching typical for most other organs. Dr. Fouad attributed the growth of the phenomenon to the chaos of Syrian borders seen in many places.

Attempts to contact someone involved in these criminal activities was impossible. But knowing that the price for a kidney ranges from $14,000 up to a million dollars, and that every day an illegal organ surgery occurs somewhere, we can see why this business flourishes alongside oil smuggling and monument theft in Syria. Although the media spotlight found its way to stories of the ruins and the oil, humans are just another number in the big Syrian dilemma overburdening the world’s conscience day after day.